This is going to be the most informal Food n'Flix post I've ever done.

I've had a crappy week my lovely Spudguns!. I really hope your's has been decent.  September 2018 marks the 8th anniversary of Foodn'Flix. The first year I joined in; which was 2015, when September rolled around we were allowed to do a viewer's choice. And at that point, I did a 4 movie combo with a common theme. I also went with 4 different recipes. So of course, the second our fearless leader Heather said that this month would once again be a viewer's choice month and hosted by the official Food n'Flix blog, allowing us to pick any of the previously viewed months' movies; I knew I wanted to do something like that again. So I quickly picked my four dvds Eat Pray Love, Under the Tuscan Sun, Ramen Girl and Julie/Julia. I had a common theme - starting over. In Julie/Julia, the characters move for their husband's jobs. In Under the Tuscan Sun and Eat Pray Love, the characters move because of a divorce. In Ramen Girl, she moves for her boyfriend's job only to end up getting dumped and stranded. I even had a common food link this time...eggs.  What I didn't really have was the recipe.

I knew that the movie Eat Pray Love, had a scene where the lead character is shown making herself a simple plate of food on a lazy Sunday morning, that included olives, cheese, bread with olive oil, grapes, prosciutto, asparagus and a hard boiled egg.  The movie Ramen Girl, has a quick shot of a bowl of ramen containing noodles, broth, greens, pork and a soft boiled egg being placed in front of the Master for his approval. The movie Julie/Julia has a scene where our lead character is hovering over a large pot trying to get one perfect poached egg while arguing with her best friend. And the movie Under the Tuscan Sun, has an egg shaped  blue vase that the lead character clings to for her sanity. Each scene represented a major turning point for the characters involved.

Now, normally, when I do a Food n'Flix post, I give you a detailed account of the food throughout the entire film. I can't this time. Even had I chosen one of the movies and not the whole lot, there is just too much food to keep up with in each. From chocolate cake, wine, grapes, garlic, cheese, fish, noodles, bruschetta, onions, duck, stew, breads, leeks, pizza, tea, olives, ice cream, to tomatoes, peppers, pork, rice, and of course the eggs; these films were jam packed. And that's just naming a few.

But it was the eggs that stood out in my mind. Each egg scene -seen, came with a lesson for the character.

"Eat Pray Love"- The egg is seen as part of the basic meal our lead character makes for herself. It represents her accepting solitude. The character had been looking at a fancy nightgown while out with friends, and when her friend tells her to buy it, she as "For whom?" her friend replies "For you." We then see the lead character sitting on the floor in the fancy nightgown with her egg plate, having for the first time accepted that she's going to be okay single. She's finally accepted the company of herself as being enough. Up to this point, she's never been without a relationship. It's also the first time in the film we see her cook. Up till then, all her meals have been out at restaurants or at other people's houses.

"Julie/Julia" - The character of Julie has stated near the beginning of the film, that she's never eaten an egg as is. The eggs are done as a bit of a group effort. We see her, her husband and best friend standing in their tiny kitchen, sweating over the idea of making the perfect poached eggs. Which they seem to do. This is the big learning curve moment of truth for our lead as she admits to her desires and envies. It's the first moment she has any real confidence. It's also the first meal she's cooked we see her share with her friends, as well as the first time we see her really being taught by the cookbook. It represents her confidence and what would end up being her celebrity.

"Ramen Girl" - The egg is delivered here two separate ways. The physical egg is shown in a bowl of ramen but not by our lead. Instead, it's a minor male character whom serves the Grand Master Chef in order to get his approval. When it's the lead character's turn to serve her bowl of ramen, she's gone off recipe. The Master then tells her she's yet to learn what she needs to know. The lead character's struggle throughout the film is learning to make order out of chaos. It isn't until the day she leaves town, and is handed a large red egg shaped lantern, that she finally gets the approval she's been waiting for. And has discovered the balance within the design/plating of the ramen bowl. Up to that point, she managed to learn technique but without soul.  For her, it was representing restraint and balance.

"Under the Tuscan Sun" - Still hurting from her divorce, our lead character grabs an egg shaped blue glass vase as she moves out. She chooses to let her ex husband have everything else, but for some odd reason of defiance, she dumps out the contents of the vase and takes it with her. She keeps it for the first few years as she moves from a rundown apartment to her villa in Italy. Later on, she grabs it throwing it against the wall shattering it. Releasing herself from her hate, desperation and pain. The egg vase in this case represents the cycles of relationships. She first takes it when depressed at the end of her marriage, and breaks it at the beginning of her neighbours' marriage. The egg lesson here is healing and love.

Eggs have always represented beginnings and endings, fertility and protection.

So after all that what did I make?  I had made deviled eggs, (basic egg yolk, mayo, salt, pepper and paprika) but they were just so ugly. Then I remembered the line from Julie/Julia, where the character is taking about how she decided to tackle the poached eggs on a day when nothing in her life seemed to be going well. 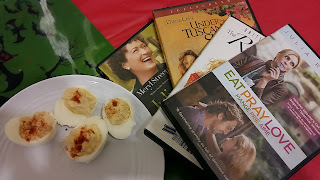 So, I ended up making poached eggs. Which, were far far less than perfect.  And paired it with a quick instant ramen and green veggies. So, not really a recipe this time around, but just what the day needed. Ugly eggs to comfort at the end of a bad week. 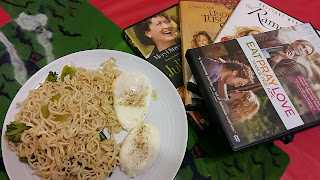 That's all I've got for you this time. Yes, I know, not the usual way I like to do Food n'Flix, but it's what I have to offer this time around.  Don't forget to join us next month, when once again, Heather from All Roads Lead to the Kitchen, will be hosting. The selection will be the Disney movie Princess and the Frog.

Posted by Domestic and Damned at 7:15 PM