What that Movie Inspired July 2019

Spudguns!, it's been a long while since I did any of these. This one came about because of a conversation with my friend Heather over at All Roads Lead to the Kitchen.  We ended up both feeling nostalgic over a few situations, and movies. The conversation took a weird side road into certain foods, rice being one of them. That lead to this challenge...our Rice and Ramen and $5 Challenge.   Yes, you read that long arsed title right. This movie inspired foodie moment had to have Rice, Ramen and be under $5 total.

Any movie we wanted. But, the rest of the rules had to be followed. I have to say, this was actually one of the hardest ones to manage. Just from a budget point of view.  I instantly knew what movie I was going to use, and had half an idea for the recipe.  Ironically, I ended up using one of the movies I had been failing at recipes for in the last few months. But the second I decided to pair the movie with this challenge, well the "recipe" worked so smoothly.

Okay, so what movie you are asking?  The 1997 comedy The Pest starring John Leguizamo and Jeffrey Jones.

plot:  Pest is a street smart con artist who is in debt with the Scottish mob, and when a German millionaire offers him Fifty-Thousand dollars to be hunted for 24 hours, he says yes. Before long Pest drags his buddies into the mix and still manages to impress his girlfriend's parents.

This is based on the 1924 story The Most Dangerous Game.

I have to admit, I know this is a comedy on the surface, but when you actually get down to it, it's one of the scariest stories out there. When I first saw this movie back in 1997, I couldn't get the original story out of my mind. There's been dozens of versions of this story's main plot over the last hundred years, but Pest is one of my favourites.  This could have easily been a straight up horror film. I know as a comedy it was given a lighter rating, but with the amount of crude jokes and the fact it is not in any way a politically correct film, you would think otherwise. And let's face it, this film would never stand a chance at getting made today.

So what did I end up making?   Pest's Bestest Ninja Roll.  There is no way you can call this dish a "recipe". 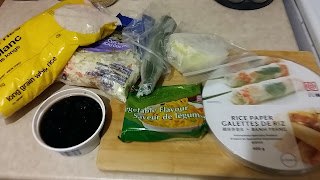 I started out by making the ramen, removing them from the liquid, and cooking the rice in the ramen liquid. 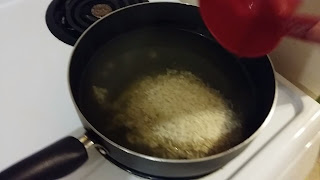 Chopped up some of the onion, black olives, and cucumber.  And a handful of the pre-made cole slaw (carrot, green cabbage and red cabbage) 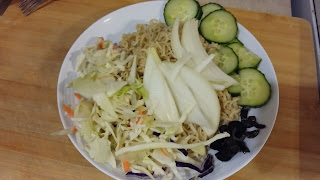 Following the instructions on the package of rice paper, I soaked it in water before laying out on a flat surface. 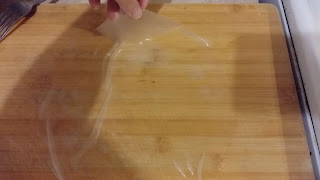 Then proceeded to roll the noodles, cucumber, onions, olives, and cole slaw. 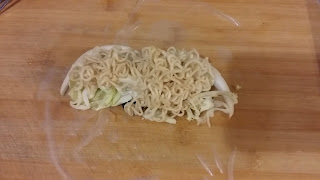 I served the rice on the side. 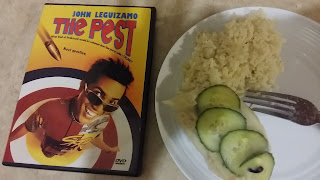 So the scenes that inspired this were when Pest is working as a driver for a Chinese restaurant, and is eating both rice and later in another scene noodles. As well, the fact the character of the German hunter; Shank is constantly with olives in his martini.  And the title of it came from a line where Pest has to pick between his friends Chubby and Ninja when asked who his best friend is. The character of Pest tends to add a lot of  extra "s" to his words. (You`re my bestestsssests friend)

Here`s where my brains sort of got stuck. I was thinking in the sense of the total price instead of the fact I`ll only be using a small portion of most the ingredients. All but the ramen which I used the whole package of.  I actually had everything already in my kitchen. Didn't even need to make a trip to the grocery. How cool is that?  I used a cup of the rice and only a handful of the premade cole slaw. (I tend to get 4 to 5 meals out of a bag of the slaw) and only a few slices of the onion and cucumber. And only four of the olives, and one of the riced paper.  Works out roughly to $5 a person.

Okay so that's my movie pick and my dish (yeah don't feel right calling it a recipe) Don't forget to head on over to All Roads Lead to the Kitchen to see what Heather picked and was inspired to make.

Posted by Domestic and Damned at 9:45 AM