Spudguns!, it's been a few months...I've had nothing to say the last two months. But, I joined in for the May Foodn'Flix...literally just crawling in under the finish line with my offerings. The May selection was hosted by Debra over at Eliot's Eats and she picked the 2011 Midnight in Paris.  Now, I've mentioned this on the blog way way way back in the first year of the blog, Day 75.  But, here's a brief recap.

plot:  When a writer suffering from writer's block goes on vacation with his girlfriend and her parents, he finds himself in awe of the city around him. As he ends up spending his nights alone wandering the streets dreaming about his heroes, he mysteriously travels back in time to the 1920's. Inspiration begins to strike as the midnight hour engulfs him, leaving him wondering if it's just a dream.

Okay, so as I mentioned, I've talked briefly about this movie before when it first came out, and I didn't care for it. I should have loved it. All the markings of my kind of movie was there. It's a Woody Allen movie, it's about a writer, it's about time travel, it's about art and magick.  Only, for me it missed the mark. Sitting through it a second time for group, I was halfway hoping I had missed something the first time around, that maybe since it's been almost a decade I'd discover something in it I liked. Nope. Still not doing much for me.

Okay, so the food in this movie is sort of there but it's not a main concern, so it's pretty much in the far background most of the time.

There is a scene near the beginning of the film, where one of the characters mentioned the sauerkraut and frankfurters, and my mind right away went to that. So I went right out to the store and picked up a package of veggie dogs and ...could not for the life of me find any sauerkraut. It ended up being one of the crazy items that the stores in my city have not received since the whole isolation situation has been going on in the world.  Then I thought I would just go with it anyway.  I "assembled" my loaded veggie dog with cole slaw, mustard, mayo, cheese, onions and peppers. 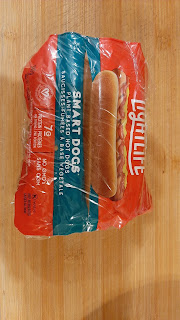 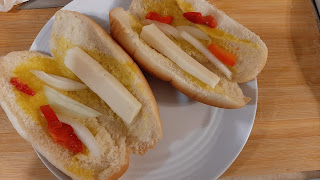 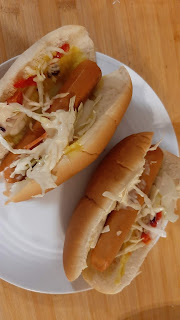 But I wasn't happy with how it looked on camera. So, I started thinking about a second dish and my mind kept returning to the end of the film, where we see a very minor character who literally has two scenes near the end of the film, a detective who himself travels back into time to the Court of Louis XIV.  This seemingly unimportant character actually ends up being a key player. Through the whole movie till this point, you never know if the lead is daydreaming, or drunk or in a coma from a scene where he trips and hits his head or if he's actually traveling back and forth in time? That is until the detective finds himself trapped back in time.  The table of Louis XIV has a breakfast which consists of the pears, peaches and meat pie. So I decided to make a "mock steak and kidney pie".

Drain the kidney beans, boiling them till soft.   Add mushroom, celery and carrots. Let simmer for about 15minutes.
Add onion, ground pepper and garlic salt. Stir and let simmer for another 10 minutes. 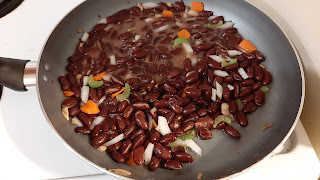 Add jackfruit, stirring in more water if needed.  Simmer for another 15minutes. 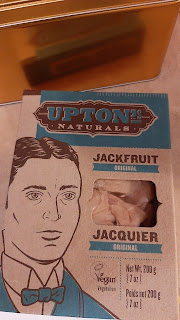 Prepare pastry.   I used a store bought ready made tart shell.
Fill pastry and cook at 350degrees for 35 minutes depending on your oven. 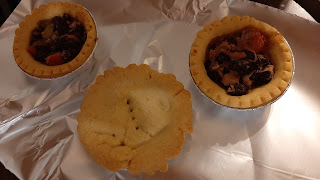 I've never used jackfruit before this. In fact, never even tasted it. I wasn't sure if the bitterness would work with the rest of the savoury ingredients so I only used three medium sized pieces. Thankfully it did.

There you go, two dishes inspired by very different characters. Don't forget to check out June's Foodn'Flix selection, being hosted by Culinary Adventures with Camilla. She's allowing the theme of Any Movie that is  Set or Made in Hawaii.

Posted by Domestic and Damned at 10:27 PM