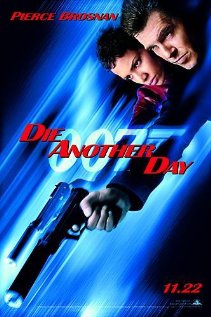 plot: Bond is captured in Korea and after over a year being tortured, he is traded and sent home. He then takes a mission in Iceland to stop the diamond smugger who was the one responsible for his capture.

I was disappointed. There were the usual moments of coolness, an invisible car, witty comments, nifty looking suites, but there was just something that seemed like it was off with the film.
It felt almost as if they were trying to combine two films into this one, and there wasn't the kind of chemistry between the pairing of Brosnan and Berry as you would have hoped.  These are two great action stars, but this film didn't mix them well at all.

The film just seemed to drag for me, and the opening shots were comical at best, and didn't feel like they fit with the storyline.

what do i think i learned from this film?
Shinny things are pretty and sword fights are a lost art.
Posted by Domestic and Damned at 4:33 PM