I've been to a few of the parties over the years, and some were great, some were drunkenly put together and not so great.


The plot of this seems like a mess when you first view it.  Aliens, Frankenstein monsters, zombies, cannibals, vampires, geeks and greasers.  The brilliant Richard O'Brian took something from every genre out there and mashed it up in a tasty cocktail.
But after viewing it a few times, you start to unravel the threads that combine to make Rocky who he is.
So to speak. 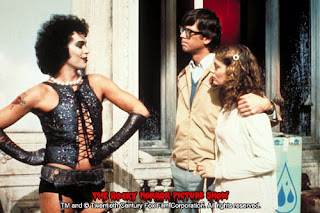 A story about innocence lost and even found, of hope and doubt and desires that many people are afraid to admit they have or even might have.

I have to admit, my favourite songs from the soundtrack are "Sweet Transvestite"  and part one of "Floor Show-Rose Tint My World"  though I would be amiss if I left off "Going Home"from my personal list. 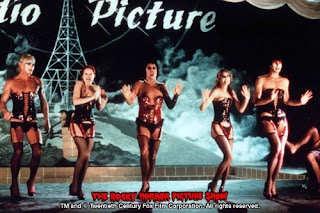 Everyone has a character that they really connect with, usually the more aggressive characters like Frank n' Furter or Magenta.  I have to say, after one party I went to as the character Eddie, you have to appreciate the role a bit more. (we had five Magenta's that year, one Columbia and two Frank'n'Furters but no Brad, no Janet and no Riff Raff or Rocky)
I had rice down every part of me that particular night, which was not fun at to clean up.


Columbia's rant in the pool room really shows the vampiric undertones to the Frank'n'Furter character.  She always put me in mind of the character Lucy from Dracula.

Let's make a toast, do a little dance, and have some dinner... the menu is meatloaf, roasted not baked heavy on the cheese.Then settle back for a midnight double-feature.


I hope that anyone who might be reading this feels free to share your memories of Rocky Horror... I'm sure they are groovy.  Happy Hallowe'en.

Posted by Domestic and Damned at 11:59 PM