This month's selection for Food n Flix is being hosted by Girlichef. In honor of this being the 5 year anniversary of Food n Flix, Heather has allowed everyone to pick their own movie from the past 5 years worth of selections.   When she told me this, I yelped for joy and did my geek chair dance.
Okay, so the Food n Flix group hasn't covered any vampire movies...yet, so my specialty was not on the menu, but fear not, my lovely little Spudguns! there was still a great selection to choose from, and it happened that I had half of the past selections on dvd.  My issue was choosing between them.

My gut reaction went straight to Practical Magic and to the scene at the end where Gillan needs to be saved and Sally activates the phone-tree, getting help from all the women in the neighbourhood. Particularly the part where both sisters are carrying the large soup pot to the garden.  Made me think of a potluck. 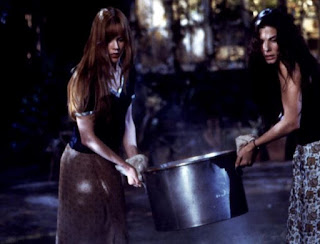 A Practical Magic potluck...a practical magick potluck... and then I laughed out loud continued to geek chair dance, and decided to make it a real (for the blog's sake) potluck. So I picked three more movies that had a similar theme, Simply Irresistible, Woman on Top and Mistress of Spices.
Three of these films I've talked about in year one of the blog, the fourth I haven't yet.  Be warned, my notes are intensely long this time around as I did notes for all four films. 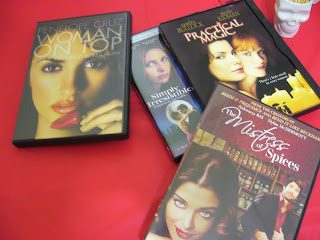 Mistress of Spices plot: A herbalist who's life is dedicated to seeing to the needs of the members of her community, falls in love braking all the rules set out for her by her coven; and soon believes the very spirit of what she works with has turned their back on her, taking revenge on everyone around her.

This is the 2005 drama starring Aishwarya Rai Bachchan and Dylan McDermott and based on the book of the same name.

Practical Magic plot: Two sisters who come from a family of witches, and have been hampered by a family curse, each believe they have finally found love. Sally, though married briefly with two daughters, ends up widowed and having to move back in with her aunts, while Gilly, finds herself in an abusive relationship. After the girls accidentally poison the abusive boyfriend, they find themselves haunted by his ghost literally, and soon Sally becomes involved with the detective sent to investigate the murder.

This is the 1998 drama starring Sandra Bullock and Nichole Kidman, based on the novel of the same name.

Simply Irresistible plot: About to have her family's bistro closed by the bank, a young woman is given a message by someone claiming to be friends with her dead mother. He points her in the direction of a wealthy businessman, talking her into buying a bucket of crabs. One of which happens to be her familiar. Taking the groceries back to the bistro, she finds her luck starts to improve when not only does she make the best food she has in her life saving the bistro, but falls in love with the wealthy businessman. As each meal she cooks for her customers casts a spell causing them all to reflect back her own emotions, she realizes where her real power is.

This is the 1999 romantic comedy starring Sarah Michelle Gellar and Sean Patrick Flanery.

Woman on Top plot:After finding her husband cheating, a Brazilian chef heads to America to live with her best friend. Not wanting to be heartbroken any longer, the two friends preform an offering to the goddess Yemanja, asking for her to take away the heartbreak. The same time, back in Brazil, her husband insults the goddess during an offering by the local fishermen, causing their restaurant to close. Finding out where she has gone, her husband follows her, but learns that she's more popular as a cooking host on the local news then he ever was in their restaurant and plots to get her back.

This is the 2000 romantic comedy starring Penelope Cruz and Harold Perrineau Jr.

Deep sigh- I was going to find a few common foods in each movie and make one big dish, but in the end I decided to do one dish per movie, to make it a "potluck" (cooking =pot, magick=luck...well I thought I was funny) Choosing the dishes was surprisingly easy, having them work together taste wise was where the real "magick" came in. Then again, that's what you expect from a real life potluck. 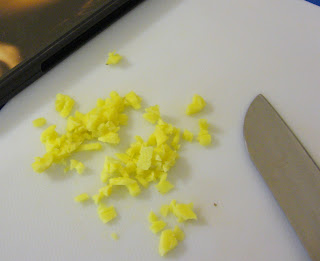 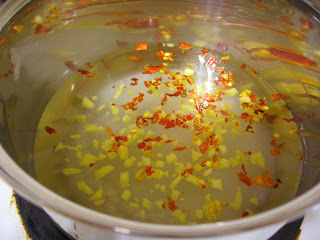 Make a simple syrup with the sugar, water, red pepper flakes, salt and ginger.
Bring to a boil, turn heat down to low and simmer for 15 minutes.
Remove from heat, cover and let steep for 30 minutes

This was inspired because of the scene where she offers him a lime pop, and as he begins to tell her about his mom dying then gets up to leave, she sneaks a pinch of ground black pepper into the drink and it causes him to open up to her, telling her about his mom.

I have to admit, I was stuck on what to call this, until I actually tasted it myself.  The pepper flakes leave a wicked kick in the back of your throat for a few minutes but have you going back for more.

Yes, the bottle says "milk". When I was looking at the store for something that looked like the pop bottle she uses in the movie, this vintage style printed one was too perfect. 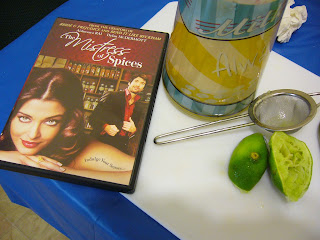 Woman on Top "Hell of a Heartache" Mac and Cheese

This was inspired by the scene where she tries to make the second offering to the Goddess and everything goes wrong and they end up  using a boxed mac and cheese. 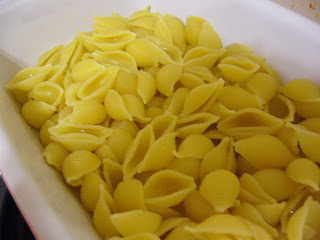 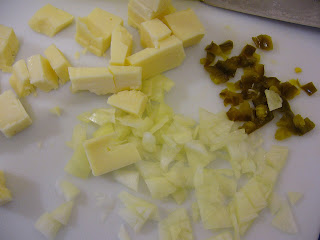 Make pasta to package instructions.  I thought it would be cute to use the "shells" given Yemanja is a sea goddess.

Melt the butter along with the onions and the jalapeno, sauteing for a few minutes,
add milk.

Slowly stir in the other cheese (I used Monterey Jack), add hot sauce (to your taste)
Continue to stir until the sauce is thick, then pour over pasta (or depending on your pot add the pasta to the mix)

Because I used a white cheese, I sprinkled a few pinches of crushed red pepper flakes on top just for a splash of colour. 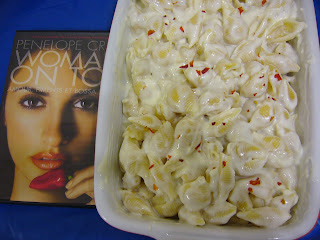 This was inspired by the scene where the love interest shows up at midnight with the vanilla plant, and she starts to make them dessert, creating the vanilla fog; while the blueberry cheesecake is sitting beside them on the table.

Mix the butter and the crumbs well, lining bottom and sides of your spring latch pan (depending on shape of pan)
firmly press into place  (I used the bottom of measuring cup)
Chill for 10 minutes 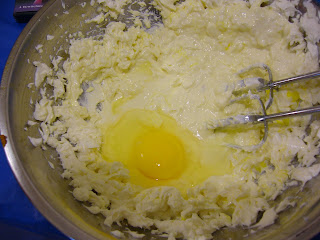 Mix up the cream cheese till smooth with beater,
adding the eggs one at a time,
add sugar, mix till smooth,
add juice and vanilla, mixing again
add sour cream mixing again, 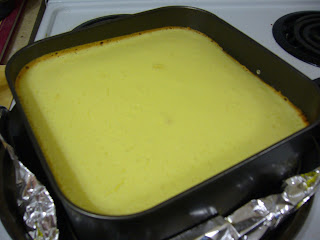 Preheat oven 325degrees, and bake for 45minutes if using a water bath.
Let cool for a half hour, then chill for 5 hours. 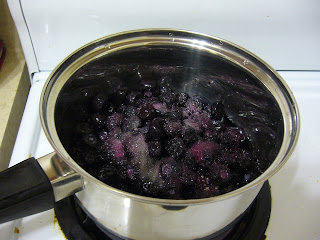 Bring to a boil, lower heat,
simmer, let cool before adding to cake

I had a square pan so I had to double the crust ingredients. And the original recipe called for a water bath, but I didn't have any other pans large enough to do that.  So instead, I just turned the heat down to 300degrees and gave it an extra 20 minutes of cooking. 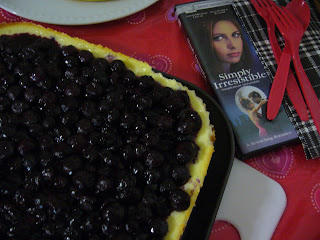 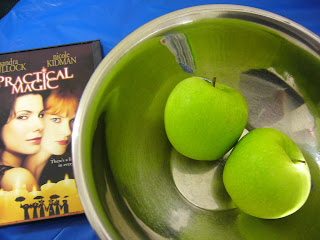 Apples are a theme in the film, from being on the dinner table in the backyard scene when the characters are younger, to representing the death of Sally's husband, to a bowl of them being knocked over by Gilly when she goes to throw the pancakes away.
And this was really inspired by the scene where Officer Hallet joins them for breakfast, where they have pancakes, and Gilly tries to use her enchanted syrup spell to un-invite him.

I normally use the recipe in the Joy of Cooking on page 644 and just alter the measurements cause the original recipe feeds 16-18 large pancakes. 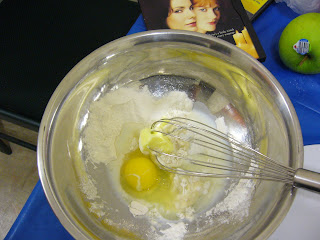 So I used a lot less then the recipe called for, giving me about 5 pancakes. 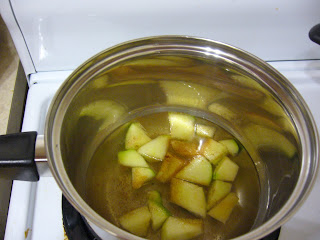 Bring to a boil, reduce heat
simmer, let cool.
It didn't come out as thick as I was expecting, but I'm going to put that down to the fact by the time I had gotten to this recipe, I was low on sugar. I'm sure an extra few teaspoons would have done the trick. 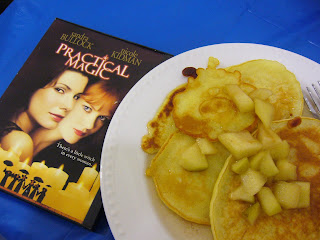 The tastes worked together surprisingly well. Though I don't think I would have a large glass of the spiced pop right after eating a forkful of the nacho-mac n cheese. 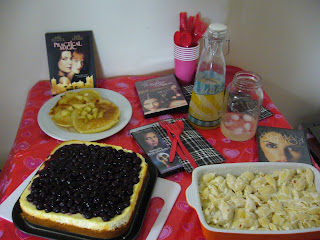 As I said, when I heard we could do this, pick our own selection from the past 5 years, my mind instantly went to my favourite movie Practical Magic, and it ended up being the one dish that almost didn't make it on the table.
It being a breakfast food, I was wondering how well it would fit with the rest of the meal, but had to remind myself, potlucks don't always jive when it comes to the choices on the menu. Some stick out like a sore thumb.


I know this is the longest post I've ever done, and if you've forgotten what the common themes were running through these four selections, it's magick, heartbreak, fear of falling in love, community. 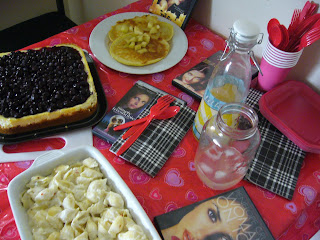 Posted by Domestic and Damned at 11:25 AM