Spudguns! It's that time again for the all vampire book/movie club. This month's selection combo was Witches of Eastwick.

Book:  Alexandra, Sukie and Jane have been friends for years. Ever since they all moved to the small town of Eastwick. Alexandra is getting bored with her current lover Joe, who keeps asking her if she wants him to leave his wife; while Sukie has just decided to exchange her current lover the town minister Ed for her boss Clyde, and Jane is also bored with the fact her current lover Raymond Neff is too demanding. The three women decide it would be nice to have a change of pace, when they find their worlds turned on it's side as a new man moves into town.
Unfortunately for the three witches, Darryl Van Horne, is more than just the talk of the town. He's also the center of attention from the other women. His entrance stirs up trouble with the city zoning board, but at the same time, manages to give half the town new jobs. He claims to be an inventor, but none of his works every seem to make it past the first creative stages. Meanwhile, he's prompting the three witches to expand on their own careers; pushing Jane Smart into trying harder works of music designed for a solo spot in the orchestra, as well as promising to make Alexandra Spofford the next household name in art. As each woman is seduced by their own fantasies of what Darryl really could represent for them, their home lives are breaking down. As the wives of their lovers are also beginning to want their own freedom from the husbands.
Felicia's husband Clyde, with his dreamy ideas of becoming a step father for Sukie Rougemont's children, snaps one night killing his wife with a fire poker before hanging himself. Brenda Parsley (Ed's wife) is both relieved and annoyed by the fact Sukie has dumped Ed for Clyde, as the affair was the one thing keeping Ed in check. But because of Sukie's desire to move on to Clyde, a teenaged Dawn sweeps in to ruin the equation. Dawn convinces Ed to run off and join a group of radicals opposing the war, which in turn gets Ed killed.
With the deaths of Felicia and Clyde, their children Chris and Jenny arrive in town. The three witches take a liking to the younger Jenny, inviting her to join their coven. Sadly for them, Jenny manages to steal Darryl from them, doing the one thing they couldn't, marry him. This sets off a chain reaction of hate from Jane, who convinces Alexandra and Sukie to help her get rid of the girl. They perform a spell using sympathetic magick by creating a poppet of wax and personal belongings of Jenny's. Jenny quickly becomes ill, and diagnosed with cancer.
As an elderly couple -the Hallybreads; move in to town and buy Felicia and Clyde's house, Jane sets her sights now on the husband Arthur, leaving the wife Rose to deal with a new loneliness. Rose then befriends Dawn, Brenda and Greta Neff forming a new coven of their own.  Before long, Jenny dies leaving her now very wealthy widower husband Darryl Van Horne free to move back to New York with his lover; Chris, Jenny's younger brother.
Alexandra, Sukie and Jane have no other options but to do another spell each for their perfect man having decided they no longer want or need to stay in Eastwick.

So this book which is a 1984 novel, is for starters, set in the 1960s. Though, not a lot of "60's" details really stick in your brains letting you know this. It's mentioned here and there, but it honestly could be any decade really.

The big main theme here is women's liberation. Anyway you slice it, it comes down to a woman starting over and taking back her power. No pun intended.  It differs vastly from the movie version, from the fact they already know they are witches, to the multi-layering of extra characters, to the fact they are already very solidly having affairs when the story begins. Not too mention, the character of Darryl Van Horne is basically a bystander in it all. He's more a prop in the novel than anything else. Nor is he ever expanded on character wise. The story is seen through the eyes of all the women in town. Even with information in regards to the character of Darryl, it's either given by the four main women -Alexandra, Sukie, Jane, Jenny; or Rebecca the waitress who is dating Darryl's butler.  And nearly half the novel is done in second-hand/third-hand style. As gossip passed between the women. 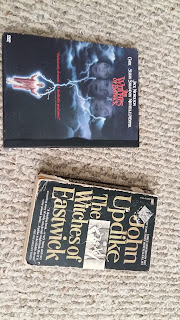 Movie: Alex, Jane and Sukie are three bored housewives. Jane is freshly divorced, Alex is widowed, and Sukie's husband abandoned her. Every week the three spend their Thursday nights trying out new recipes, drinking too much, gossiping about the rest of the town, and wishing for a better life. One night, they make a mutual wish for a new man to enter their lives.  That same night unknown to them, their wish is granted as Darryl Van Horne has just bought the old mansion on the hill. This sets off a ripple of excitement through the town, gathering the attention of Felicia; the town's self declared moral compass. Before long, the three main women find themselves the center of a scandal as each is seduced by Van Horne. Felicia, on the other hand has become obsessed with driving them out of town. But her visions of the coven drive her husband crazy, causing him to kill her then himself.
On the heels of the double murder, our main characters Alex, Jane and Sukie; decide to break away from Darryl's influence, but a moment too late as each ends up pregnant.
The three feel no choice but to use magick to send him away as they finally realize it was their combined will that brought him there to begin with.

This is one of those situations where the adaption is so different from the original works, that you almost can't even call them the same story.  In the book, Jane is the villain. There is nothing likable about the character of Jane Smart at all. She's vindictive, bitter, selfish, violent, abusive, and just greedy.  The character was not just softened for the movie, but overhauled into something more human. The movie combines the characters of the Neffs with a few others, giving Greta a base few mentions at the martini night scene when they are talking about the school principal. Where as in the novel, she's got a larger role.

The movie, is a starting over movie. All three of the main characters have lost the love of their life one way or another, and find themselves struggling to find a balance again.

I've talked about this movie in more detail last year when I hosted it for the May 2016 Food n Flix.  As well, I've done two recipes for it in the past. (Hallowe'en 2015 day 13 and the May 2016 Food n'Flix)  even though there is a ton of food mentioned in the book, I decided not to try any recipe right now.

The vampire element you are asking...in the novel, Jane becomes more "alive" as Jenny deteriorates. The character of Jane goes from pale and mousy, to vivacious and brazen more and more as the spell works. Jane has literally stolen the life out of Jenny by having cast the hex on her. And it's at this point in the novel that Jane Smart ends up with her choice of lovers. (Which once again, has me casting notice to the subplot in Dracula where after the women are bitten and turned, the men become afraid of their sexuality.)
In the movie, Darryl is the one who holds the vampiric hold over the women. Manipulating them into giving him what he wants most, which are children. (and this vampiric element tying it to the idea of him being Dionysus/Bacchus which I talked about in a previous post) We see yet another parallel to the idea of Dracula and his three brides/Lucy and her three suitors; as Darryl has linked himself spiritually/emotionally and psychically to the three women, leeching off them their love and growing more powerful from their fears. (the scene where Darryl is sitting eating the basket of fruit watching the television sets of their video confessions, and suddenly their fears become real. He gets a powerful jolt from that both metaphorically and literally)

And with that, I'm going to end this one here for this month.  I'll be back later in the week with the official announcement post for August's combo, which I do believe is Night Watch...till later.

Posted by Domestic and Damned at 12:05 PM