This month's Food n Flix selection is Popeye, and is being hosted by the Lawyer's Cookbook

The One Movie A Day Challenge part: 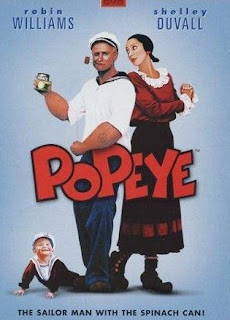 plot: Popeye comes to a small port town looking for his long lost father. Along the way, he ends up adopting a baby and falling for the landlord's daughter. Soon, they find themselves battling Olive's ex boyfriend's rage, as he taxes her family into the ground.

Okay, I'm not going to lie, I had a difficult time sitting though this one. I've seen it once 36 years ago, when it first came out at the cinema, I was six. And didn't remember anything from it other then I hated it then.   I honestly don't understand what it was that seemed to keep Shelley Duvall in movies back in the day?  She's unfunny, untalented and like a walking skeleton. The only reason she got this film was because she looked like the cartoon character to begin with.
I heard a rumor that not only is this up for a remake, John Cena is up for the lead role of Popeye. (please let it be just a rumor) I think this movie should be buried under some dinosaur bones in a tar pit and forgotten it ever existed. But, if a remake happens, John Cena would make sense as the new Popeye. At lest he wouldn't have to pad his arms or anything. And how fitting, given I think a potted plant has more talent.

What do I think I learned?  I will never like musicals ever.

Okay, so my recipe got derailed four different times. The heat here has been unbearable, but I finally decided to give something a try, anything! Specially since I missed out last month. So I went pretty damn simple with a Garlic Mashed Potato Cake.  Basically, it is a veggie version of a fish cake. Nothing special. But I did manage to use 4 of the items seen in the film. 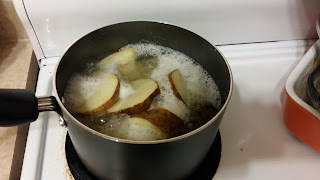 I sliced up a couple large baking potatoes, and boiled them in salt water till soft, then drained them. and added a bit of chopped up onion and ground black pepper. 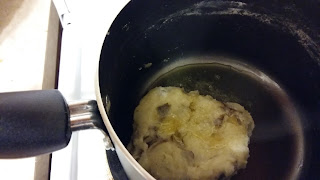 Shaped them, and fried in a bit of olive oil. They were quick, simple and so tasty. 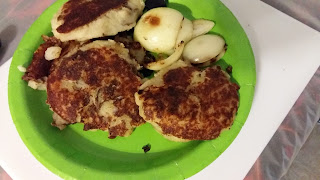 And this is the part where I get to tell you, next month's selection is Hotel Transylvania 2...take a wild guess who's getting to host that one...right, right.

Posted by Domestic and Damned at 5:04 PM