Spudguns! Got your dark roasted coffee bean goodness...yummy right. Okay, so I just heard there is going to be a remake of the movie Little Vampire. You know I'm digging that. It's getting a Hallowe'en release. Makes sense. And that will hold me over till the next Hotel Transylvania film scheduled for next year.  Which again, timing wise fits, with the whole reboot of the Universal Monsters that they started this year. I haven't had the chance yet to see the first in the reboot; The Mummy.  I plan to though. I know, it's a Tom Cruise movie and I hate his stuff. But, let's face it, he nailed Interview with a Vampire. Against everything anyone believed, he shinned in Interview with a Vampire. And I suppose at some point I need to actually see the Mummy movies that came out in the last twenty years.

Big segue...you will notice, I never did relaunch my Top 5 Favs segments. That's because I never got any responses from anyone. I had asked back beginning of the year for some movie recommendations and, nothing. I'm disappointed.  That was one of my more popular topics on the blog here too, which surprises me actually that no one...moving on from my self pity. 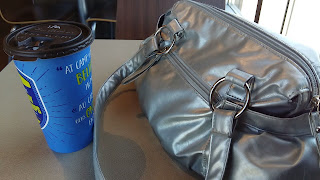 Recognize the silver purse don't you? Right you are, it's what inspired that dream sequence that I wrote in Nosferatu Adventures. Look at that, the purse is a star.

Yeah, my brain is in full on vampire mode, more than normal. As I've pretty much been watching nothing but vampire films for the youtube movie reviews. And as I mentioned before, there are a few different reviews on my youtube then there are here in written form.

Another segue...I'm pretty happy with the current schedule for Nosferatu Adventures. So I think I'll continue on for another few months of just doing them every two weeks. Which means, there will be one this Sunday (July 16th,) 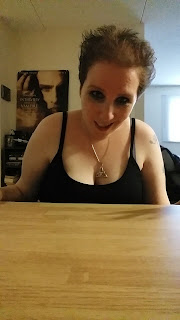 If you want to catch any of my video reviews you can do so (here)  With that said...til next time.

Posted by Domestic and Damned at 8:45 AM