Spudguns!  This would be my offering for this month's Food n'Flix, of which I'm hosting.  In case you forgot; I picked the remake of Ghostbusters. (here is my announcement ) 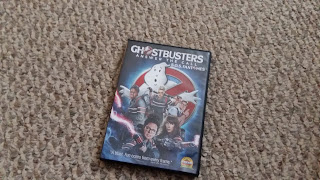 I've talked about this movie in year 5 of the blog when it first came out, but the run down goes like this... (and made a Slimmer Soup inspired by the first two films {here})

Plot:  After Prof Abby Yates, learns that a book she'd co-written years before; that she thought had been destroyed ends up online for sale, she tracks down her former best friend Dr. Erin Gilbert in order to ask her to stop selling it. While there, Abby gets roped into joining Erin and her coworker Jillian Holtzmann as they investigate a local haunting. This leads to them being invited by Patty, a subway worker, into also investigating what she believes is a ghost, that has started to terrorize people on the subway system. Before long, the foursome are in need of a new office, a new secretary and new ride; as they begin to clean up the city's latest mess. The gang discover that a crazed fanboy, Rowan, a janitor for a local hotel; has been studying the same source material they have. Only, he's out to use the knowledge to open a portal between the living and the dead.

One of the things about this film I really dug, was that 90% of the effects were done practically in-camera. All the slime we see through out was actually cooked up in the props kitchen, the one scene at the opening which has a character is running up stairs that break away; which was done with pullies; a comical scene near the end of the film with the Stay Puff Marshmallow Man who has the ghostbusters trapped was done with them against glass. It's good to know that movies are starting to return to the "old ways" more and more.

One of my favourite lines in the film comes from Patty when they are at the heavy metal concert hunting the demon ghost. She shakes her head saying that the music is making the creature angry and "To Play Something Gentle!".  I decided to combine that line with the fact we see hot dogs a couple of times in the film, along with Patty mentioning that she has a cousin who will "work for Vienna Sausages", and of course one of the earlier scenes in the film when Holtzmann is eating potato chips during their first hunt.

I decided to make a "Heavy Metal Hot Dog Casserole" 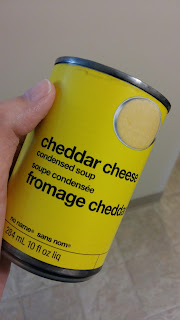 
Boil your pasta one minute underdone, drain MOST of the liquid leaving about a tablespoon,

transfer to your casserole dish,

add the soup to your pasta and mix well 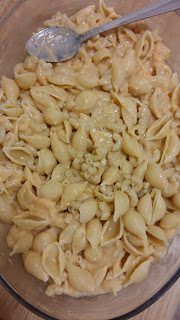 Cook your hot dogs to package instructions (in this case boiled for 3 minutes), then chop up into smaller pieces, 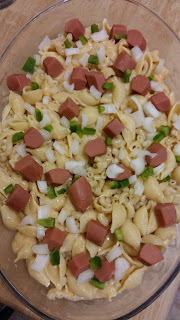 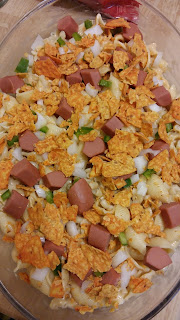 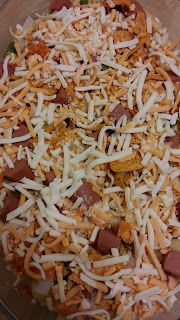 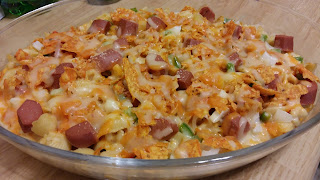 This is the part where you say "oh my god! She actually made a casserole!!!!"  Yeah, I know I know, they have been few and far between.

I decided to go with the nacho flavour theme here, because veggie dogs are known for having zero taste to them. (unless you use a spicy veggie sausage) So I thought, instead of trying to "doctor up the dog" I'd just take the easier route, and pick a flavour profile that I know would work.  No guess work needed, just nacho cheese all around. And other than salting the pasta water, there is NO extra salt/pepper, as I find canned soups no matter what the flavour, to be very salt. 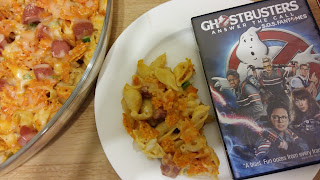 Don't forget to check back in a few weeks (I think I said the 2nd of November) to find out what the rest of the gang were inspired to make when I post the round up.  And also, if you want to join in with us next month, the selection will be Planes Trains and Automobiles  and hosted by Amy at Amy's Cooking Adventures

Posted by Domestic and Damned at 4:53 PM