Spudguns! it's that time of the blogging month, when we head into the kitchen and stir up something  based on a movie. This month's Food 'n Flix selection is Runaway Bride, and is being hosted by Fix Me A Little Lunch.

plot: A reporter learns about a woman who has left three men at the altar, and travels to her small town to interview her. Before long, he's fallen for her himself.

I talked about this movie before on the blog (in Year 5 Day 72) both then and now, I watched a TV Edit, and both times I mentioned the "runny egg yolk"...okay not funny I admit. But, yes as I mentioned back couple of years ago first time I watched the film, there seems to be a running gag about how the lead character likes her eggs. In which she always says the same as the person she's with. Reflecting on the fact she doesn't know her own mind and is always trying to just fit in.

I wanted to stay away from the two obvious, being eggs and corn. Corn being the second most noted food in it.  So in this, she dumps 3 guys at the altar. I started thinking of things I could do that were 3 ingredient based. I then of course went to the next obvious thing, a wedding soup. Broth, Greens and Meatballs.  But, the vegan versions were so over the top with ingredients. Some didn't resemble the original dish in any way at all. But, my mind was made up, and I decided this one time I'd go with the obvious and made a vegetarian version of wedding soup. Only, I wasn't sure I could pull it off with just 3 ingredients.

Lucky, my kitchen cheaters version allowed me to technically do it in 4. Technically. 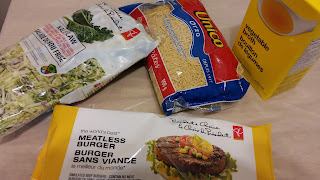 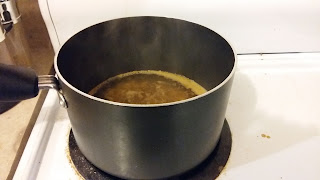 I started by bringing the vegetable broth to a boil, adding in the orzo and cooking for 6 minutes.

I then pan fried one of the veggie burgers, breaking it down into smaller pieces

The slaw I added at the last minute, just giving it a chance to wilt more so than cook 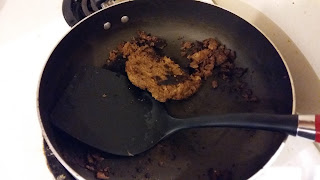 Because both the broth and the veggie burger were pre-packaged, I did not need to add any extra salt or seasonings.

Not as out of the box as I like to try to be, but I think this is a good match. 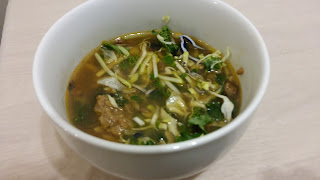 That's about all I've got for you this table-setting. Next month's selection is the animated Coco, and is being hosted by Culinary Adventures with Camilla.