Spudguns!, I've been promising another round of  "What That Movie Inspired Me To Do",  and finally, I have gotten off my lazy arse and written it up. This is another one where my friend Heather from All Roads Lead to the Kitchen,  and I joined up. This time around, we picked the tv show Charmed.   The rules this time were simple, we could draw inspiration from either the original Charmed or from the reboot, or both.  I went with both versions of Charmed.

What I ended up doing was picking three episodes from each version that had a similar element.   From the original I went with episodes from Season 1, 2 and 5; and at the time of this posting, only the first season of the reboot had aired yet.

Original Charmed Season 1 Episode 8 "The Truth is Out There and It Hurts"   had a similar theme to  Season 1 Episode 2 "Let this Mother Out" of the remake.    In the original version, Prue is wanting to know if her boyfriend Andy can handle the knowledge of her being a witch, and uses a truth spell on him. The spell has a time limit on it of 24 hours, after which Andy will no longer remember the results of the spell.  In the Charmed remake, Mel's girlfriend Niko accidentally drinks a truth serum meant for Harry their whitelighter.

Original Charmed Season 2 Episode 18 "Chick Flick" had a similar element to Season 1 Episode 14 "Touched By A Demon" of the remake.   In the original, the sisters find themselves battling both the Demon of Illusion, who has pulled characters out of old horror movies; and the horror characters before being trapped within the movie themselves.   In "Touched By A Demon",  Macy accidentally creates a portal into a television show, which lets the tv characters out, but pulls herself and Harry into the world of the show.

Original Charmed Season 5 Episode 19 "Nymphs Just Wanna Have Fun" has a similar element to Season 1 Episode 7 "Out of Scythe" of the remake.   In the original, Paige finds herself turned into a nymph while the sisters try to help a group of lost nymphs when their satyr is killed.   In the remake, an injured satyr arrives on the girl's doorstep needing their help.

What I ended up going with was a sub sandwich.   Subs are mentioned full out in "Let This Mother Out", while we see the bacon sandwiches in "Out of Scythe"; as well as a turkey sandwich in "The Truth is Out There and It Hurts".   Salads are seen in almost each episode, and pickles in "Let This Mother Out".    I started with a selection of vegan meat substitutes : a vegan ham, vegan bacon and vegan bologna. 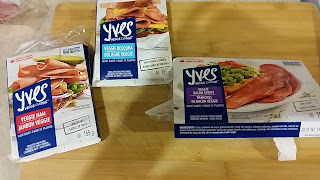 I added sweet mustard pickles, mayo, and onions. As well as a handful of premade cabbage and carrot cole slaw. 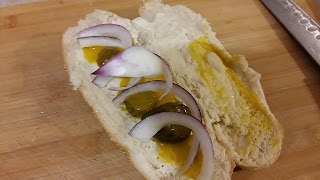 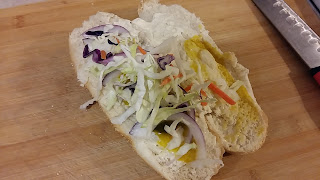 After cooking the vegan bacon in a small bit of oil, I added it, the vegan ham, vegan bologna and some cheese. 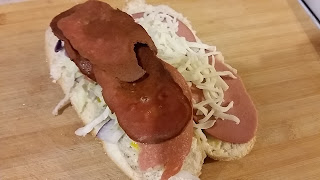 I decided to serve my charming sub with some pink brew.  Okay, so that was a mixture of pink lemonade and lemon iced-tea (both frozen) but I felt it fit well with the idea that in "Let This Mother Out", the truth spell is in the form of a tea. 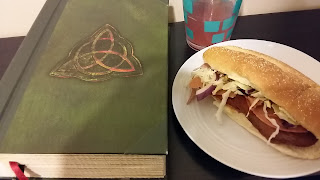 That's my offering for this time around. Don't forget to stop by All Roads Lead To the Kitchen, to see what magickal potion Heather came up with.

Posted by Domestic and Damned at 12:29 PM