Spudguns!, I've got another dish for you inspired by challenge.  Once again, I joined up with my friend Heather from All Roads Lead to the Kitchen, for a Buffy the Vampire Slayer (the tv series) inspired post. 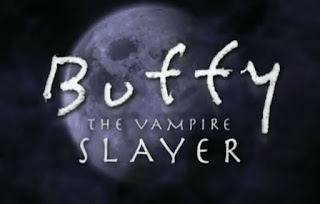 With seven seasons of the show to pull from, I had fun having a mini BtVS marathon, and of course, there are two food centered episodes - Pangs (season 4 episode 8) and Double Meat Palace (season 6 episode 12)  that popped into my mind right away.   In Pangs, Buffy is feeling homesick on Thanksgiving, and decides to take the role of making a family dinner for everyone. In Double Meat Palace, Buffy finds herself needing to get a job and ends up working in the fast food place.

But, I was drawn to my favourite episode Lover's Walk (season 3 episode 8) and a line spoken by Spike.  In Lover's Walk,  Willow is trying to make an anti-love spell in order to keep her and Xander's feelings at bay. But when Spike returns to town heartbroken over his own breakup, he kidnaps them both forcing Willow to create a major love spell so he can win his true love back.

There is a scene where Spike is crying to Willow and says "A Chaos demon. Have you ever seen a Chaos demon, they're all slime and antlers."   This has been one of my all time favourite lines from the entire series, so of course I had to try to do something that would represent it.  What I ended up doing was a version of a cake I've seen on Food Network Canada website. The Poke Cake.  Only, I made cupcakes.  Why am I calling it a dish and not a recipe? Because I used a cheat through the whole thing, with cake mix, store bought frosting, store bought pudding and pretzles. So really can not call it a recipe.

I followed the directions on the box, and divided it into a muffin tin. While that was in the oven, I mixed some vanilla pudding with green food colouring. 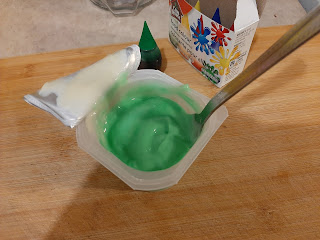 As the cupcakes cooled, I then went ahead and mixed together the white frosting with red food colouring.  Once the cupcakes were cool enough to handle, I dug a small well in the center of each, filling it with the green pudding and replacing the dug out pieces. 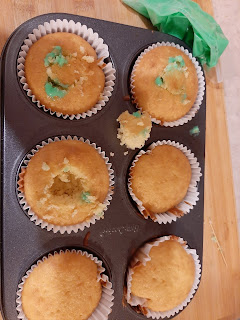 I then frosted them with the now red/pink frosting. From here, I simply stuck a few pieces of the pretzels into the tops, and poured a bit more of the green pudding over that. 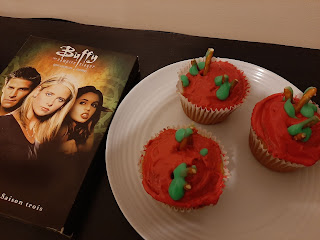 This was intended to represent the "slime and antlers" that inspired the whole idea. The intention of the poke cake, is that because you've "poked holes" into it and filled it, that when you bite into it, the cupcake should ooze. Sadly, I didn't have enough filling, so mine just sort of clumped. 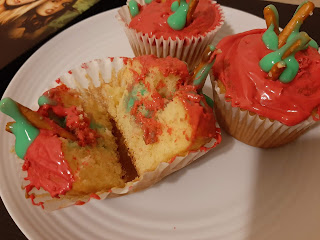 Delicious in it's sticky gory-glory. That's all I've got this time for you, don't forget to head over to All Roads Lead to the Kitchen, and see which episode inspired Heather.  Till late.

Posted by Domestic and Damned at 7:14 PM