Spudguns! It's time for another recipe inspired by a movie. And it's an oldie but a goodie because it's another edition of 80's Day!  If you've tripped along with me through any of these before, then you might have guessed that every so often I get my friend Heather from All Roads Lead to the Kitchen, to join me on this.  We never tell the other what movie we picked. Totally a surprise. Which for me is the best part.

plot: After the death of their teacher, a group of young deputies; including Billy the Kid, begin to take the law into their own hands as they get revenge against the man who killed him.

This is the part where I start to feel really old cause, I first saw this 30 years ago in the cinema. Yeah, back when Kiefer Sutherland was still the hot new thing having just done Stand By Me and the Lost Boys, and westerns were still the style of movie that made the big bucks.  Well, let's be honest, westerns are still a big draw, they just don't look like the dusty westerns up there on the big screens that we automatically think of when we hear the word. (Guardians of the Galaxy, Mad Max Fury Road, Priest, Fast and the Furious series)

I think one of the things that makes this movie seem good;(it's by far not a "good movie", but it's a "great for it's time" genre film)  is that there really isn't any good guys. Everyone is there for revenge on everyone else, on both sides of the situation. And the lead character of Billy the Kid, is just sort of a loose canon. While everyone else is trying to reel him in, he's sneaking around behind their backs lying about what he's done. You're asked to blindly follow this guy without ever knowing what his true motives are. So you as a viewer are in the same situation as the rest of the gang. Never sure from one second to another if Billy can be trusted or that he's even who he really says he is?

I have to admit, I couldn't get the idea of baked beans out of my mind the whole time watching it. From about the second scene, before we even see any mention of food; simply because of the dvd cover. 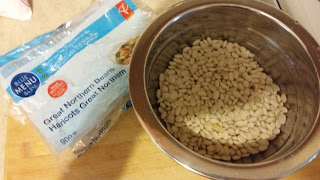 I used 2 and a half cups of white beans, rinsed them, drained and then soaked them in fresh water for about 6 hours. (package said overnight)     Then boiled them for 2 and a half hours. 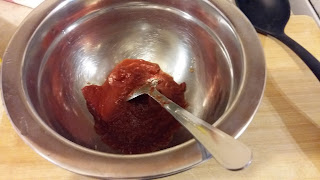 The sauce was super simple.

I chopped a half an onion, mixed everything together and baked for 2 hours at 300 degrees. 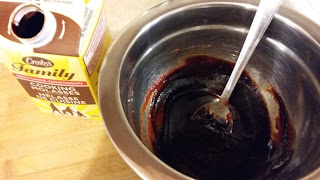 I decided then to just make a quick pan fried potato, done in butter, salt and pepper. Along with some corn.

Little bit on the obvious side, but sometimes, simple is just the best direction to go.

That's about all I've got for you today, don't forget to head on over to All Roads Lead to the Kitchen, and see what Heather created and which movie she was inspired by. Posted by Domestic and Damned at 10:29 AM