Spudguns! It's recipe time again. And this month, I'm hosting one of my all time favourite movies, the 1992 Bram Stoker's Dracula for Foodn' Flix.  Now, I've talked about this movie more than I should care to admit to, over the decades, so I'll skip the massive review (as I've done one on this few years ago here) and just give you the basics.

plot: After returning from the crusades, Vlad Dracula learns of his wife's suicide. Vowing revenge, he swears in a blood spell/oath, that he will return from his own death. Four hundred years later, he is visited by Johnathan Harker, whom he learns is about to marry Mina, the reincarnation of his own wife. Imprisoning Harker, Dracula travels to London with the plan to seduce Mina for himself. Dracula ends up having to seduce and destroy the friends and family of Mina in order to do so. When Harker returns to London, he joins forces with those friends still alive and they chase Dracula back to Transylvania for one last showdown.

This version of Dracula, is by far the closest to the novel that exists today, even with the addition of the connection to the real life Vlad Tempes. Who did in fact fight for the christian church in the 1400's.

I find this movie to be such a lush tapestry of texture. From the richly done ball gowns both Mina and Lucy wear, to the sunset showdown, to the characters themselves.  Whenever I see the scene of Lucy talking to Dr. Seward in that over the top wedding dress, I can think of nothing but a three tier cake. Or how Renfield's hair makes me think of a cream puff, or the armor Dracula wears in the opening scene how it makes me crave manicotti or chocolate sea shells.

But it's my beloved Renfield who got my vote this time around. Played by Tom Waits, the iconic lunatic who offers a plate of bugs to his favourite doctor. It's a shame, most television edits cut his scenes.

"Would you care for an hors d'oeuvres, or a canape?" 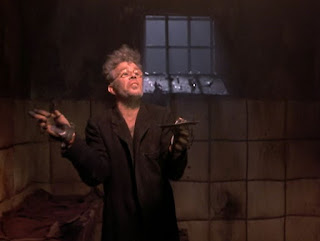 I ended up making a trio of offerings.  My Impaled Tofu,  homemade Garlic flatbread, and mushroom Tartare. 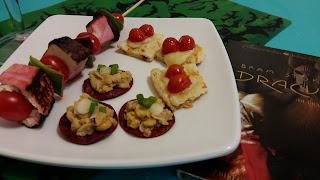 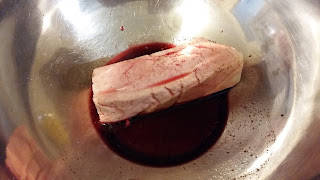 I started by marinading the tofu in salt, pepper and about a half cup of the pickled beet juice for about an hour and a half. Turning the tofu every so often.

Pan fry the tofu until at lest two of the sides are resembling a crust.  This will help the tofu from falling apart. Cut into cubes.

Cut some of the green peppers and beets into smaller pieces. I pan fried them as well for a couple of minutes, just to let them soften enough to impale.
Assemble the kabob with a few of the cherry tomatoes. 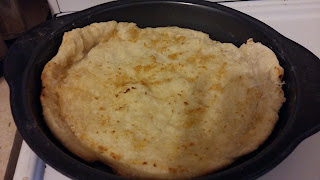 I then made a simple flatbread.

Mix into a dough, roll out to desired thickness.

Coat the dough in oil and garlic, baking for 45 minutes at 350 degrees depending on your oven.
Remove from oven, let cool for a bit before cutting into bit size pieces.

Add the shredded cheese and rest of the cherry tomatoes and return to oven for another 10 minutes at 250 degrees. This is just to melt the cheese. 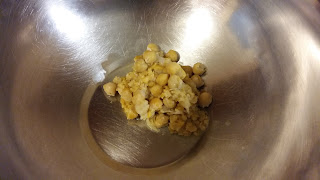 Drain the chickpeas, and cook them for a few minutes until you are able to mash them.
Chop the mushrooms,
Mix chickpeas and mushrooms with a bit of the salt and pepper and oil. 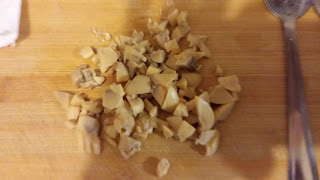 Arrange mixture on the beet crackers, and garnish with the green onions.

I used a store bought cracker for this step. 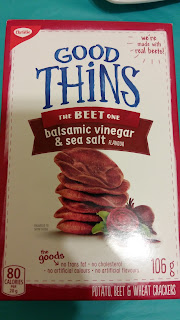 I mentioned I did this as a trio. In the story, the number 3 is a common element. We have the 3 Brides of Dracula who hold Harker captive, the 3 Suitors of Lucy (Holmwood, Morris and Seward) and the 3 Suitors of Mina (Harker, Dracula and in a sense Van Helsing)
As well, I picked the green peppers and green onion to represent the lush green Lucy wears a few times in her ball gowns; as well as the garden scenes. The beets were the perfect shade of red to represent the vampire aspect of the blood as well as the mile long robes Dracula wears in his castle and the nightgown Lucy wears when she sleepwalks. 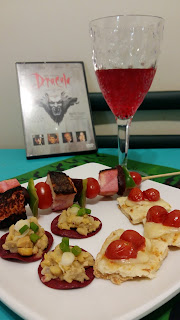 I have something to admit. I picked this for the look of it. The creativity and feel of this movie.  In fact, I said to Heather more than once, "there is only one food scene in this film."  Well, I was wrong actually, as there was more food in this movie than I had thought.
I had mentioned in my announcement post (here), that this movie is the last movie to be done completely without CGI effects. From the opening scene when Elizabeta falls to her death which is done with puppets, to the invisible footsteps of the Brides which were foam risers, to Dracula in smoke form which was layered onto the film, to the water dripping upward which was done with rewinding the film etc. It's a very beautiful piece of artistry that is nearly lost in the modern age of movies.

Come back at the end of the month for the round-up.  Don't forget to join Foodn'Flix next month for the movie The Incredibles, being hosted by Simply Inspired Meals.

Posted by Domestic and Damned at 6:34 PM