reason for seeing it: It's about a writer who is struggling to get his first play done

Whenever I come across a movie about a writer or artist I jump at the chance to see it. This was one of those quiet surprises that I wish I had heard about sooner.  It's a 2010 film, but set in 1979, which it doesn't feel like it is.  The story is brilliantly done to reflect any time period, anywhere.  Which I've always felt is the benchmark of a great story.  The only real nod that the film is meant to be in the 70's, is the wardrobe of one character and the use of typewriters/wall phones/ tape machines. 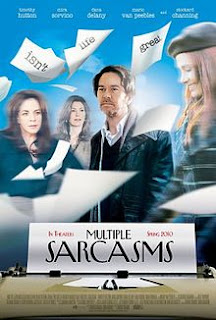 plot:  a man who works at a job he no longer likes, starts writing a play about his life in order to figure out why he's not happy.  He ends up in a fight with his wife and realizes he no longer wants to be married. His best friend is a woman he's known since high school, and in a moment of drunken clarity, he finally admits to himself that she's the one person he is the happiest around.


There are scenes in this where the lead character is hiding in the toilet writing.  I know how that feels, being surrounded by everyone without having a bit of quiet, and ducking into the only room where you can be left alone long enough to get one thought straight.  The fact he sets up a mini office with his typewriter, tape recorder, and a small side table all around the toilet is brilliant.  It says a lot too how the character views his life up to that point.

Posted by Domestic and Damned at 10:09 AM