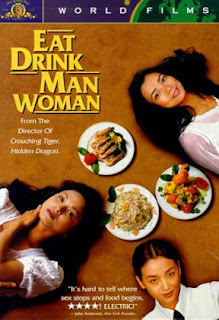 plot: Three women, desire to leave their father's traditional home in order to have a life of their own. Each afraid how the other family members will react once they tell them.

This is the 1994 drama starring Sihung Lung and Jacklyn Wu.

I watched this online, so there is a lack of dvd cover in the photos.

This movie kicked my arse all over town. Seriously, it had me whining to people after the first five minutes, because I was the only one in the group who could not seem to find a copy with English subtitles.

Asian cooking, is not my forte. I don't really eat it, and I never cook it. I had a hard time just identifying some of the items used in the opening scene. So, needless to say, my notes are a little on the thin side this time around.

My one saving grace, is the fact that I've seen Tortilla Soup (year one of this blog) and given Tortilla Soup is the English remake, I at lest knew what the basic plot was.

I don't know what to tell you all this month, other then I was literally last minute trying to decide what to make for it.  Then, feeling totally defeated thinking I would either have to pass or to doctor up instant ramen; I got this idea.
I put on my ICP Riddle Box cd.  Riddle Box...box, like a case, like a briefcase, like a lunchbox. This caused me to first run to find my ICP lunchbox, which got me thinking about Bento boxes. Right, slap to the face it was staring at me the whole time, the scenes where the chef brings the little girl her lunchbox every day.
Yeah, it was one of those cases where I was over thinking it and the second I stopped thinking about it, the answer came to me.   Okay, yeah my ICP lunchbox is a collectors item, and not really large enough for anything...so I used a plastic container instead. Just pretend it was done in a cool black metal lunchbox...

So I decided to make for the bento style lunchbox, a scallion pancake, eggs, rice and fruit.

The recipe I found on the Food Network site, and it ended up being a mess. I don't know if the recipe was missing a step or something, or if what I thought was a strange mess was what it was suppose to look like?   The original recipe called for mixing slowly boiling water into flour with a wooden spoon till you get a ball. That just brought me a bowl of paste. I ended up having to add extra flour, oil and get my hand in there for it to form any sort of ball. 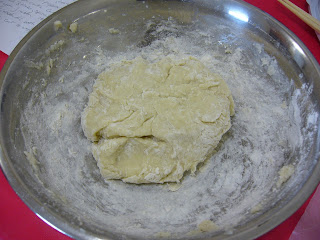 In bowl sift flour and slowly continue to add water, mixing with a wooden spoon till a ball forms. 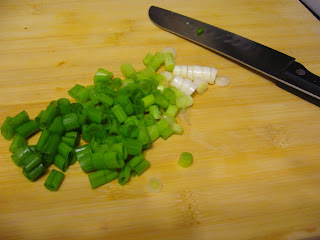 Cover with a damp cloth for 30minutes

On floured board roll out dough into a rectangle, brush on the oil mix, add salt and pepper and the scallions.
Roll dough into a log, and cut into 4 pieces. Take one piece and twist it up 3 times to make a spiral, then flatten once more.

In a hot pan, add the canola oil and cook both sides till golden. 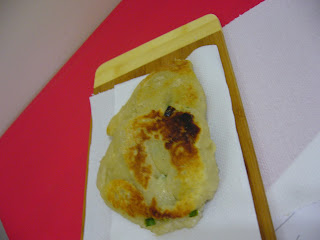 Okay, so I had to add an extra flour. Almost 2 full cups to the mix, plus a few splashes of oil.
I then had to keep adding extra flour to my board because it just wasn't holding up.

I think I will omit the salt when I try this again, as I found the salt was just too much with the oil. 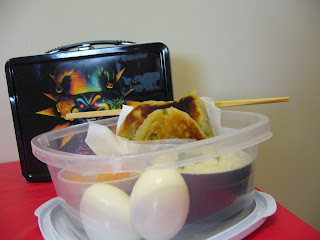 They ended up not being any kind of identifiable shape. It ended up making four hamburger sized (there are two in this photo) "pancakes".

The total time was listed as an hour and half from start to finish, but I clocked it closer to the two hour mark.

I rounded out my packed lunch with two hard boiled eggs, some white rice and orange slices. 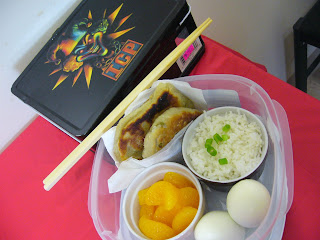 I had heard of the bento boxes before, but never really paid any attention to it. It wasn't until I decided to do this today, and looked some of it up that I realized there is a whole sub-culture around making packed lunches. From fancy boxes to decorating the main items to look like cartoons, to take-away restaurants that deal only in them, to classes for housewives to be able to make them for their kids.   I came across a website that was dedicated just to cookbooks on the topic.

I also have to admit, I was really thinking of going in a completely different direction for about five minutes; and making a veggie burger because of the fast food scenes.

Yeah, you know as always, not the prettiest but it is really comforting to have someone care enough to pack you lunch no matter how old you are.

Posted by Domestic and Damned at 12:34 PM