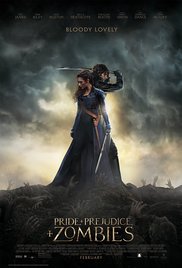 plot: The Bennet women are some of the most fearful and skilled slayers of their generation, trained to fight the zombie outbreak that has engulfed England. Now, if they could only find a way to win themselves husbands who are still alive, their lives would have meaning.

I've been looking forward to this movie for the last few years, since I heard it was going to be turned into a movie. And you know what...I was bit disappointed.  This deviates from both the original source and from the modern monster version.  I seem to remember Lydia and Wickham ending up together in the PPZ book version, and Wickham in a state of needing a nurse. As well as the character of Charlotte becoming a zombie and Elizabeth helping her hide it from everyone. In the movie, none of that seems to happen. The character of Charlotte the best friend, who in the PPZ  book had a much more important role, has I think it was two scenes in the movie. Sort of disappointed to see that. As well as the character of Lydia, who becomes a victim in the movie, not the scheming backstabbing gold digger she is in the books. One of my favourite scenes from the book version had the heroes using cauliflower as fake brains to bait the zombies, but the movie seemed to bypass that idea.

In the original Austen story, as in all her novels, even though they are all set during the war, but we are never given details of any war; that is the one thing the movie of PPZ does. It sets, in it's own way, the missing "war" into the Austen stories.

The comedy didn't come across as well in the movie as it did in the Seth Grahame-Smith book. This was pretty much a straight up action flick that just happened to take place during the 1800's.

what did I learn? If you liked the show Buffy the Vampire Slayer, then this is for you.

Posted by Domestic and Damned at 4:29 PM