This month's Food n Flix selection is The Lunch Box, and is being hosted by Culinary Adventures with Camilla. 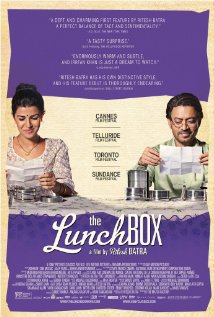 plot: After making lunch for her husband, and finding out it was delivered to the wrong person, a young housewife finds herself in an emotional affair.

This is the 2013 drama starring Irrfan Khan and Nimrat Kaur

I talked about this movie before on the blog  (Year 3 Day 141)
And once again, I watched this on Netflix Canada, so you will notice a lack of dvd cover in the photos.

For those of you who have been following my blog for the last year during the group posts, you know I get teased for the fact I like to be thorough with my food lists seen in the movies.  Well, yeah that ain't going to happen this time around. The movie's food scenes kicked my arse. I don't cook this style of food, rarely eat it, and had some difficulty identifying  most of what was seen.
I did however, see rice, apples, bananas, green beans, tortillas, curry soup/vindaloo, deep fried rice balls, tea/coffee, spices, yogurt, bottled pop/juice, bread, carrots, potatoes, onions.  The subtitles mentioned cauliflower, pasanda, lamb, wantons (the sign they are standing in front of).  Then there was what I think I saw... ravioli, stuffed plantain, noodle salad, jerky and candy (at the stand when he buys cigarettes) spare ribs or chicken wings (wasn't a close up couldn't really tell), stuffed grape leaves, rice pudding (one of the end scenes when he is talking about the wedding and they are just holding a dessert cup of something) and I thought of sardines (the fact everyone is jammed on the bus) twix (every time he grabbed his glasses case)

So, because I thought at one point there had been a spicy curried rib, I really wanted to do that. And you're all thinking...what? You're a vegetarian, you blast that fact every chance you get!  True. I have been a veggie since 2001. But, my mother let me talk her into letting me cook for her. She can't do spicy food, so I ended up compromising with a honey garlic sauce, and they were drumettes. (I couldn't find any spare ribs that morning) 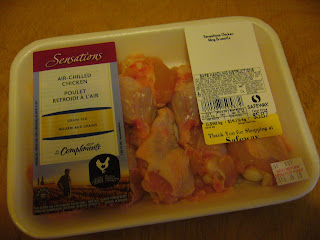 They, ironically turned out beautiful. But when I pulled up the movie once again to show my mother what I was planning, I realized, that it was not ribs in the scene. 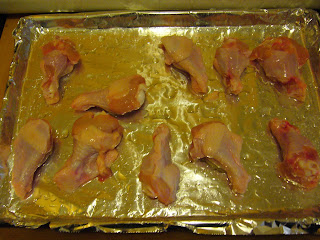 And you're wondering, why am I bothering to talk about it if it's in the end, nothing to do with the movie?  After I thought about it, it sort of fit with the whole "mistaken identity" part of the film.

Tin foil the baking sheet, then lightly oil the surface

rinse the drumettes before placing on the oiled tin foil 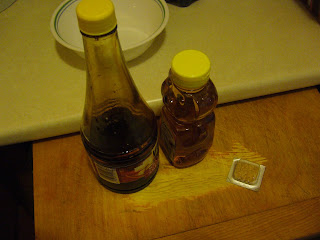 cook for 30 minutes depending on your oven at 350 degrees

The honey garlic sauce, is the most basic you can do,

mix to your taste, the honey and soy sauce
with 1 Tablespoon of minced garlic 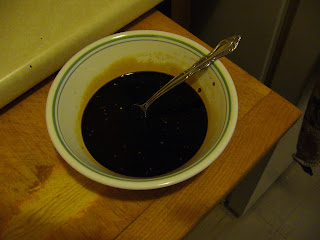 I used a prepackaged minced garlic, simply because my mother doesn't keep spices in her place and I didn't want to be carrying more then I needed to.


Stir till desired consistency, then pour over chicken

cook for another 20 minutes, turning it over at the midway point 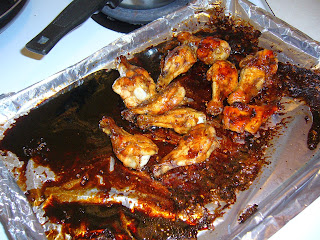 Okay, so as I stated, I'm vegetarian so I DID NOT eat these myself.  It's been fifteen years since I've cooked any kind of meat dish, so for me this was a big step towards rebuilding my skills. And they must have been good, because mother devoured them without complaint.

And some of you might be scratching your head, wondering why would I make something I can't eat or for that matter, taste test during cooking myself? To be brutally honest, I get ideas for these films sometimes that I haven't done simply because you can only do so much with tofu and potatoes. 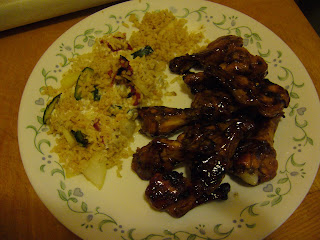 Posted by Domestic and Damned at 8:44 AM