plot: After seeing his mother killed by a vampire, Lincoln grows up to become one of the most successful vampire hunters in history.

based on the book

Two things right off - A) this is one of those times when I liked a movie more then the book it's based on and B) Jimmi Simpson.  I almost crossed out the lead actor in the starring part in favour of the actor who plays Speed, one of the sidekicks. Why? Because he's just cooler.  Seriously, he's got a fairly smaller role but he can do more with a raised eyebrow then the lead can with a monologue.

One thing that sort of stood out like a sore thumb, were the day for night scenes. I get that not every single nighttime scene can be shot at night for a variety of reasons, but shooting in what seems like the highest part of the day, and just slapping a blue filter on it, no matter how good the acting in the scene just manages to ruin the whole thing. For me anyways, I get pulled out of the moment seeing a scene done that way.
Dominic Cooper, on the other hand steals the show. In fact, both Cooper and Rufus Sewell who play the two lead vampires, draw you in. I would love to see them come back in a prequel.  Sewell has one scene where he's talking to a human, offering two glasses; one of wine and one for himself which is suppose to be blood. When his companion says no, the character takes a sip from his own glass then spits it out, having taken the wine by mistake. That is one of the best laughs in the film.

I know this movie gets gritted on for being almost half CGI, but there are just too many scenes that wouldn't have been workable otherwise. There are a lot of characters that were cut out of the story, or combined, which worked on the most part. I think my big complaint for this movie is that not enough dates were given. The timeline was a bit jumpy; specially for those of us non-Americans who never studied US history.

what did I learn? Dominic Cooper looks great in fangs. 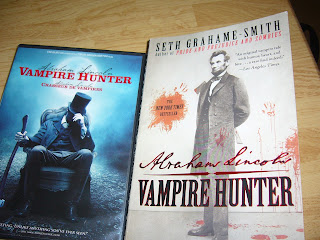 The Book:  A young man has his life interrupted when a vampire hands him a stack of journals telling him he needs to first read them, then get the information out to the public. He begins reading it, and learns that it is the lost secret diary of Abraham Lincoln, who as it turns out was one of the greatest vampire hunters to have ever lived.  We then begin to follow the life of Lincoln from the tragic events of his mother's death at the hands of a vampire, through his teenaged years bent on revenge, to his unwittingly teaming up with the vampire Henry in order to learn how to hunt and kill vampires, all the way through the meetings of the two women in his life and finally his time as president.

The story is based around the idea that vampires are feeding off of slaves. This causes a great divide between two fractions of vampires, those who want to continue and those who do not. This is represented by the two American political parties. The side that is helping the vampires are refusing to see facts, which is when the vampires run out of slaves, they will turn on those slave owners, in turn creating a new race of slaves. While the other fraction, sees things for what they are, and refuses to continue on in such a manor.
There's actually a great scene, about halfway in the book, where Lincoln is given the name of a vampire to hunt, and he comes across a very elaborate blood factory given it was in the 1800's. The idea isn't new, it's been used a hundred times over in vampire stories, but it steps out of the rest of the them vs us issue. As you have a vampire feeding off of more then just slaves and doing so in a way that keeps him under the radar for a really long time. He's sort of a good guy vamp sort of a bad guy vamp. But he represents that thin line in any debate that can easily lend to seeing both sides of the coin.
Henry supplies Lincoln with random names of vampires to hunt, and for a good portion of the story, they are at first appearances, harmless. Such as a scene where now a lawyer, Lincoln defends a woman in broad daylight unaware that she's a vampire. You get the impression that she's not one of the bad guys at all, then later that night, she ends up on the hunt list. First impressions might be that Henry is just trying to take out the competition, and clear the way so that he doesn't have to have any other vampires around.

You have the introduction of Edgar Allan Poe who connects the vampires in the American South, to Elizabeth Bathory, (something that was also done a few years before in the vampire movie Stay Alive which also starred Jimmi Simpson) stating that she fled Europe, bringing with her not just other vampires, but putting the whole idea down on her. As she slaughtered hundreds of servant girls over her lifetime. Thus, the rest of the vampire population started to follow suit, buying up slaves left right and center for the sole purpose of feeding off of.

We are given the vampire image as a metaphor for a different kind of oppression compared to Dracula.  Even the vampire good guys in this story, are unapologetic for who they are. None on either side are preaching about how they need to find other food sources, they all feed on human blood. The difference, being that the good guy vamps in this story, show restraint and compassion. Here the bad guy vamps prey on the slaves, while the good guys are preying on the thieves/pimps/murders ( one of many nods to Anne Rice's style)

There seems to be a trend in vampire fiction be it in books or movies or tv, where the lower US seems to be over run by vampires. From Anne Rice's Vampire Chronicles, to L.J. Smith's Vampire Diaries and the two tv shows it spawned (Vampire Diaries and The Originals) to the movie Stay Alive, now to this.
One of the reasons, I liked the movie more was that fact it was more vampire less politics. I found the actual political side of the story to be bogged down. I was expecting more vampire mythos. There are a lot of differences between the movie and the book. As I said earlier in the post, some characters are left out, while others are combined. One big difference is that in the book, Mary Todd Lincoln, has no clue what's going on, while in the movie she does. The book talks about Lincoln falling in love during his youth, only to loose her as well to a vampire, and has two hunting partners for the early years.

That about wraps it up for me. March's selections are I Am Legend (book) and Omega Man (movie) Which I'll do the official announcement post for in a few days. The deadline for that will be Sunday March 27th 2016.

Posted by Domestic and Damned at 7:43 AM