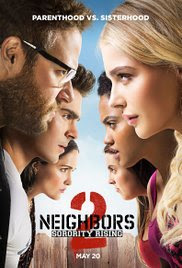 plot: With 30 days left to sell their house, a couple find themselves the victims of bad location.

So what can I say about  this?  I think I laughed once. Just once, when the Efron character was covered in beef drippings and ran across a picnic table of steaks.

The main couple, are trying to sell their house, and are in Escrow for 30 days. During that time, the new buyers can come and go as they please, to do inspections. The day after signing the deal, the old frat house next door is rented by a group of freshmen starting their own sorority. The sorority is trying to breakdown some of the gender issues slapped on the female students, by making the house the first to be legally allowed to throw parties.

The Efron character is kicked out of his apartment by his roommate who is about to get married, and ends up going the only place he can think of, his old frat house. While there, he learns of the girls' plan and begins to help them set up the sorority, but before long he realizes what a mess he's created and begins to help his old neighbors get rid of them.

I didn't find it funny. The whole equality story would have been better set in a drama. It had moments when it reminded me of Revenge of the Nerds, like when they were selling their "pot pies" and the whole idea that the drifters were taking back their dignity. But otherwise, the duo of Efron and Rogen were wasted in this. They should team the two up for something completely different and actually use their chemistry better.

what did I learn? I had no idea what Escrow meant before watching this.  I don't care how hot the guy is, men really should never do strip teases. Ever.

Posted by Domestic and Damned at 6:07 PM