plot: A young thief is tricked into sealing a magickal lamp by a wicked sorcerer, and manages to stumble across a Djinn who grants him three wishes.

Loosely based in the classic story

We all know the story, watched the cartoon either as kids or with kids, and find ourselves singing along without thinking about it. Right. So, I'll skip right to the moral of it...be yourself. That's really the whole thing. That and don't be greedy.

We see Jafar loose his chance to have the magick lamp because neither himself or his first henchman were worthy. They tried to fool the all knowing knowingness, and the henchman got turned into supper. Which, has always left me scratching my head about cause if it was just a giant sand castle how would he really eat anyone? I mean, do they just get buried or does he turn them into mud and expel it through a hot spring or something? Yes, these are the weirdo questions that I spend my day thinking about, which is why I am a writer.

We then see Aladdin stealing bread with his monkey, nearly getting killed by the royal guards because of it, but giving up the food for some children who are looking better than him. This makes Abu the monkey feel threatened, eating a large bite from his share only to hand it over to the kids too...is that hygienic?

In comes the princess who is one bad date away from being the queen, only to need to be saved by Aladdin. They fall in love and realize they can't be together because of their class-status.  Enter the magick genie who makes Aladdin prince for a day.

And suddenly, we have a murdering plot twist on our hands, as Jafar decides to marry the princess becoming king, and killing everyone who gets in his way.

I love this story. It's clearly not for kids. It's just the way fairy tales were meant to be, okay with way too much singing and dancing, but it's harsh, dark, and puts the fear of your personal god into you. It also is one of, if not the first Disney film to have the lead female strong enough to help fight.

what did I learn? Disney makes me cry.

Guess what....It's theme day again here! My friend Heather at All Roads Lead To The Kitchen, and I like doing these random movies every so often. And once again, neither Heather nor I told the other what movie we picked. I actually find this part of the game, very interesting. Can't lie, the big reveal is always my favourite part of it.

So, obviously this was my pick for today's theme, which is "Your Favourite Disney Movie".

I wanted to do homemade crackers, but I really didn't know where to start. (it's now on my to-do list) so instead, given the amount of fruit in the film, I decided to go easy on myself and made a fruit salad. 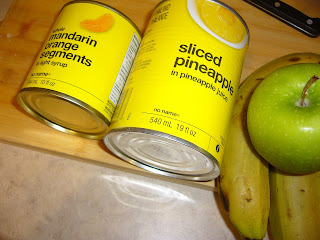 I did a slight cheat, and used half fresh - banana, apple, blueberries, raisins, - and half canned - oranges and pineapple.  Though, I suppose you can't technically ever call raisins fresh... 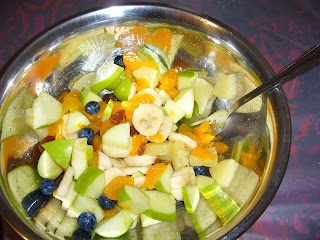 I added a few spoonfuls of yogurt and a sprinkle of nutmeg. The nutmeg I find works beautifully with the sweetness of the bananas and the raisins, while not being as sweet as cinnamon might. 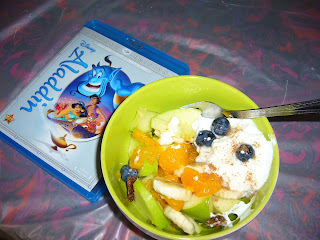 Okay, so this is the point where if you haven't been to Heather's blog All Roads Let To The Kitchen, yet, you have to go there now...

Posted by Domestic and Damned at 6:32 AM