Spudguns!, it's time again for another Foodn'Flix recipe. This month's selection was hosted by our fearless leader Heather at All Roads Lead to the Kitchen; and her pick was Princess and the Frog.  Now, if you've been following this blog much at all, you might remember I talked about this back in Year One of the blog. (Day 292)

plot: A young woman -Tiana, has a dream of opening her own restaurant in the heart of New Orleans in the 1920's. But it seems, every time she gets a step closer, something gets in her way. When a young prince comes to the area, her best friend's dad throws a grand ball for him, in hopes the prince will marry his daughter. Unknown to anyone, the prince has become cursed and turned into a frog. Tiana who has borrowed her friends clothes, is mistaken for a princess, and the frog prince talks her into kissing him. Only, instead of saving him, it turns her into a frog as well. The two then end up going to the local Hoodoo Priestess to help reverse the spell originally cast by the Voudon Bokor. When nothing seems to work, the two admit they have fallen in love and are willing to stay frogs as long as they can stay together. As frogs, they get married and are suddenly transformed back to humans.

I ended up pulling my inspiration from a short scene midway through the film. The main characters are in the middle of a swamp and decide to make a gumbo from the ingredients they can forage for, which included a pumpkin.  I ended up making my Pumpkin Sludge Cake. 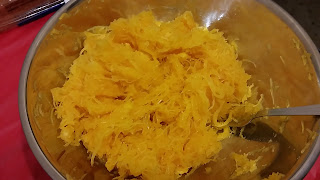 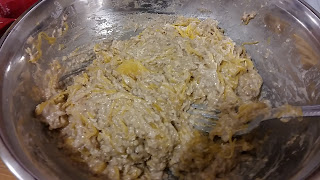 The name came from the colour the batter took on. I also topped it with a few pumpkin seeds I had roasted in salt and pumpkin spice mix. 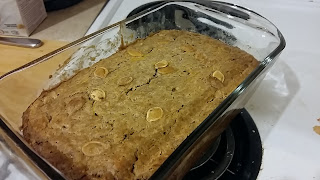 And that's about all I've got for you today.  Don't forget, you can join in next month with Foodn'Flix for  A Man Called Ove, which will be hosted by Wendy at A Day in the Life on the Farm.
Posted by Domestic and Damned at 12:52 PM