Spudguns!, this month, I am hosting Food'nFlix. My selection was not one but both The Addams Family (1991) and Addams Family Values. (1993)


In the first film, we see a depressed Gomez on the anniversary of his brother Fester's disappearance; and as every year before, they hold a seance to try to contact him from beyond the grave, no results. Meanwhile, their lawyer who has gotten himself into debt, has hatched a plan with a loan shark to get their hands on the Addams' money. The son of the loan shark posses as Fester in order to gain access to the safe. The "fake Fester" then takes control of the estate and throws the rest of the family out. The Addams's must then work together in order to get back their home.

In the second film, Morticia and Gomez have just had a new baby and need to hire a nanny. After seeing a magazine article on how rich Fester actually is, Debbie, a serial killer poses as the new nanny in order to marry Fester and kill him, stealing his money. But the kids don't trust her, and Debbie sends them off to summer camp.

Once again, I used The Joy of Cooking, for my base recipe for the cake. The lemon pound cake found on page 716.  I doubled the recipe and left out the glaze. 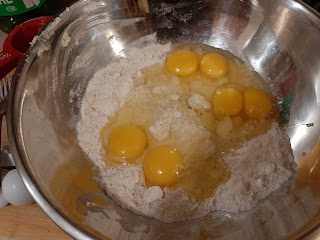 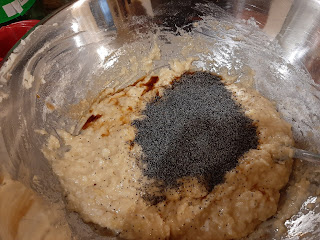 Mix all together, bake at 350degrees for 65 minutes, let cool. 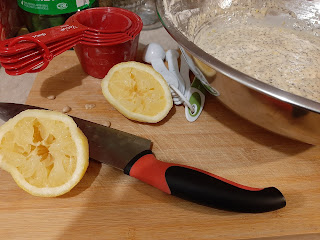 I then used a store bought icing and covered the cake, and added roughly 1/2 cup of icing sugar to the top, patting it into the icing which gave a nice marble effect

I started by freezing the cranberry juice into cubes 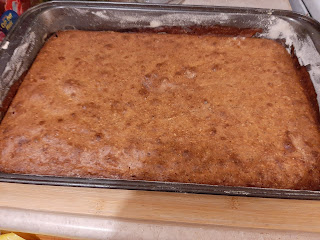 Then placed a few of the pieces of the pineapple into the bottom of the glass, adding some of the juice. Then added the ginger ale.  Once the cubes were frozen, I added them to the glass.

I was going for a slow blood in the water effect as the iced cranberry juice began to melt into the warmer mixture. 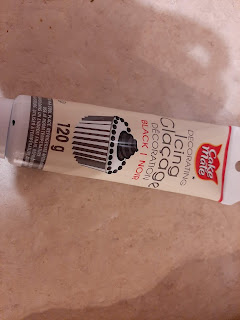 The lemon poppy seed bars were inspired by a scene later on in the movie, where Wednesday and Pugsley are selling lemonade and are talking to a girl guide. She asks if they used real lemons, and they ask her if the cookies she's selling is made from real girl guides.

The pineapple punch was inspired by a few elements in the second movie.  There is a scene where the family are at an event and everyone seems to have a punch glass/cocktail in hand. As well, after Fester is married, there are a few scenes where a pineapple is used for decoration. There is also a scene where Wednesday is talking to the boy she's got a crush on, and comments about if she ever decided to murder her husband, she'd use poison that was undetectable. 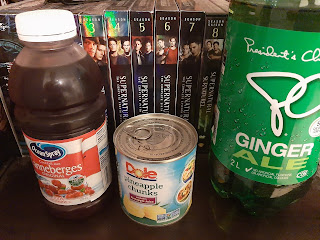 One big common theme I found in both movies, is the fact Fester is the weakest link.  It's his desire to be loved in both movies that causes the predators to invade the family. In the first film, Fester falls prey to the loan shark who makes him believe she is his mother. In the second film, he becomes seduced by a serial killer we come to learn is called the Black Widow.  Both cases, it's Fester's need for female attention that opens the door for trouble. 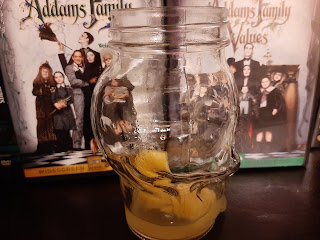 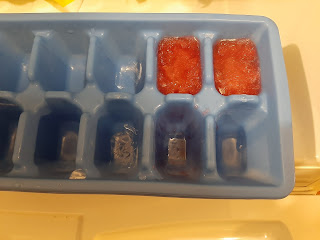 In case you blinked and missed it; Mercedes McNab is the actress playing the girl guide in the first film as well as the main mean girl at camp in the second film. 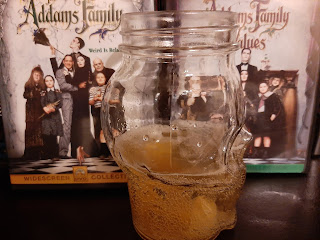 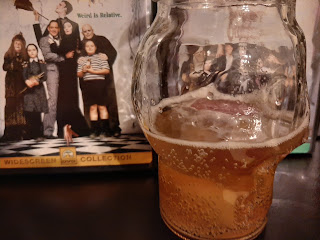 In the first movie, Gomez comments that it's been 25 years since Fester disappeared. This is a nod to the fact the original television series aired from 1964-1966. With The Addams Family  movie being released in 1991. 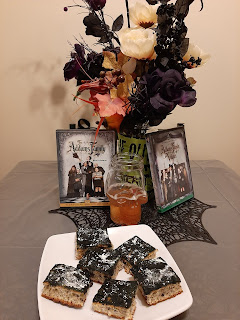 That's about all I have for you this time around. Don't forget to come back at the end of the month for my round up as we check out what my ghoulfiends created. Next month, Foodn'Flix is being hosted by Heather at All Roads Lead to the Kitchen, and the selection is What's Cooking?

Posted by Domestic and Damned at 12:12 PM