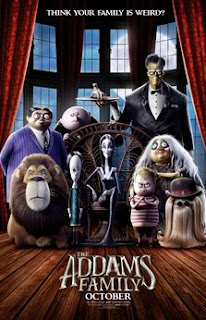 plot: On their wedding night, Gomez and Morticia are forced to flee their homeland by the hands of an angry mob. The two newlyweds end up in America ready for a fresh start where they hope to be left alone. While driving down a long patch of road, they hit an escaped mental patient. After learning that Lurch is alright, they decide to take him with them as they move into the abandoned asylum.  Thirteen years later, while planning Pugsley's birthday party, a tradition called the Mazurka, Gomez invites his mother and brother Fester to come a few weeks early to help. Meanwhile, Wednesday feeling the weight of being a teenager alone, has begged Morticia to allow her to go to the local high school. Here, she makes her first real friend, Parker.  Parker's mother is a famous designer who is single handedly remodeling the entire neighbourhood live on her show. Unfortunately, the fact the entire Addams clan is arriving on the same day as her show's big season finale, causes Parker's mother to worry and begins to plot a way to destroy the family.

The big theme here is acceptance. The entire Addams clan are forced to separate because the town where they live are afraid of them. They are called monsters, and chased away in the middle of the night. Fast forward thirteen years, and you have both Morticia and Gomez holding their kids back from being completely who they are by not allowing the kids to be part of the rest of the community. Pugsley is feeling the pressure from his dad to follow the family tradition of the great sword dance, while Wednesday is being trained in the family business of witchery.  Neither of them are completely happy. While this is going on, Parker a local girl from school,  is being repressed by her mother who expects Parker to be just like her. The town itself is called Assimilation; and everyone is happy pastel pink wearing people.

There is an inside joke, where Wednesday calls Parker's mom Plastic. Parker's mom is the embodiment of both the ultimate control freak, and minor-celebrity. And we're given a big tongue in cheek dose of how reality tv really works.

I have to admit, there was so much more potential that could have been explored here than what ended up on the screen. As it takes a bit too long to set up who's who and what's what, to the point we lose out on some of the dark humour the original movies gave.  I feel this is only the first chapter in the new version of the franchise and can't wait to see what will come of it.

Posted by Domestic and Damned at 3:24 PM