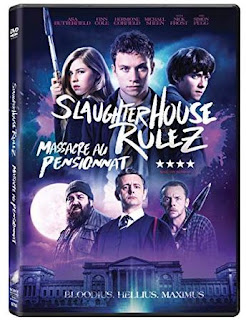 plot:  When a group of students at a boarding school discover that the Headmaster has sold off half the property to a drilling company, they put their differences aside in order to fight off a herd of giant subterranean slugs.

You've got three distinct groups here, represented by the three big names, Simon Pegg's character representing the school/students, the Headmaster played by Michael Sheen who represents the government/corporation, and the Nick Frost character who represents a group of environmentalist activists. Pegg's character is the buffering link between the extreme points of view of the other two. And that's about all you can say about the big names in the film, as they disappointingly, are not the lead characters.

As nice as it is to know that the name plates in the film have bowed down to the younger generation of actors, passing the torch, I was disappointed to learn this fact. Pegg, Frost and Sheen were the reasons I wanted to see this film. At times, you almost feel like they are a set up to a different story altogether.

I felt the comedic elements in this one were too shallow, and the main plot just a little light. The overall subject matter of this film is darker in nature, as a massive sub-plot (which I think should have been the main plot) deals with a few students who are bullied so badly that one commits suicide. Which we the viewer don't even learn until about midway into the film, and then the topic just seems to be forgotten.

The horror elements were handled well enough with a decent balance of gore and humour. Like Pegg/Frost's previous Three Flavours Cornetto Trilogy, (which I've talked about in the past) the genre mash-up actually works well for the ever present theme of not being able to let go of something once it's run it's course. In this case, Pegg's character not being able to admit his girlfriend has dumped him; and Frost's character still grieving over his brother's death 20plus years later as if it had just happened.

Posted by Domestic and Damned at 5:00 PM