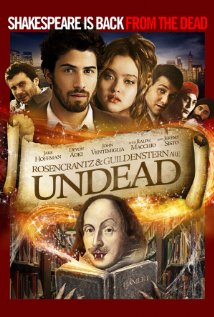 Plot: Julian is living in the back of his father's office and is unemployed. One morning he wakes to find his father has found him a job working at a theater company directing Hamlet.  He decides to hire his best friend Vince and his exgirlfriend as the leads. Only once they get there, they find this is a version of the play involving vampires.  Soon, everyone in the crew is either a vampire or just dead.

Right off, this is almost like an answer to the Gary Oldman movie "Rosencrantz and Guildenstern are Dead" {Day 21}

I first heard about this film a few years back on a horror site, but this is anything but.  It's at times a straight up slapstick comedy and it's fabulous.

Starring Canadian actor Kris Lemche (Ginger Snaps, Twitch City, Emily of New Moon) as the frightened vampire hunter, which I have to say was the big bonus for me.
The idea that vampires would be looking for the answer to living forever without being vampires is a slight twist on a plot we've seen a fair bit the last few years in movies- where they just want to be human again- but it works in a over the top sense.

You don't get too into any real mythos in this film, it just seems to be that they are vampires and that's about it. It's many of the minor characters from Hamlet that seem to be the inspiration for this version, which of course has the two characters of Rosencrantz and Guildenstern as total boobs. The cult of so-called vampire hunters are a question all their own, you're never totally sure what their real agenda is.

What do I think I learned from this film?
Vampires make great writers.  There isn't much to take from this film other then not to take everything so serious that you turn it into something more then what it might be.

Posted by Domestic and Damned at 7:31 AM