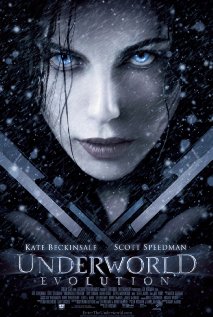 Plot: Selene and Michel are on the run after killing Viktor, the leader of her coven. Soon, they are being hunted down by William and Marcus, the brother's who's bloodline both the Lycans and the Vampires come from.

This is pretty much a shoot' em up film that happens to have a bunch of vamps and werewolves.
Much of the back story to all the characters is given in this film by a new character Tannis. His role is pretty much that of a librarian.

This is also the movie in the series that started the "Jan 20th" release trend.  The first movie was given a Sept 19th release date, but #2,3 and 4 were all either released on Jan 20th of their respective years or within a few days of that date.

What do I think I learned from this film?
You can not out run your past.
Posted by Domestic and Damned at 6:57 AM