year 5 day 175 What the movie Inspired

plot:Raoul Duke and Dr. Gonzo, have decided after much deliberation over drinks, that Duke should take an assignment for a magazine to cover the events of one of the biggest drag races in Las Vegas. After renting a very loudly stylish car, they find themselves on the desert highway stoned, drunk and decide to pick up a hitchhiker. Whom they promptly scare away by screaming about bats. The two then proceed to invade the hotel with zero intention of paying for their bills. Having gotten completely caught up in their own version of the trip, they end up missing the end of the race. As Duke is about to flee, he gets a message informing him he's to go across town for another journalism assignment, at a different hotel. The madness gets deeper for them, as Dr. Gonzo has gotten involved with a young girl. Dumping her at yet another hotel, the duo continue their rampant destruction while in a drug induced nightmare.

This is based on the book by Hunter S. Thompson.

This is my favourite Johnny Depp movie. I think he's at his ultimate peak in this. He manages to get the dead pan humour down to point, as well as having amazing on screen chemistry with  de Toro.  This is by far, the best buddy road trip film, I've ever seen! Specially given the fact they only travel together for about 10 minutes of the film, the rest of the time they are either camped out in posh hotels or trying to meet up in the posh hotels.

Besides the fact this is one of the craziest adventures, you have to remind yourself that this is based on fact. At lest most of it, given Thompson wrote a 50/50 style of fact/fiction to begin with, creating the "gonzo style of journalism". (he's my god!)  There are so many layers to this, from the culture of the 70's, to the drug/alcohol addiction, to the extreme excess of the times, to the underlining idea that easy is never really easy...that I could try to write an essay and never get close to the core.

I'm just going to say it's what a road trip buddy movie should be trying to live up to.

what did I learn? You may not know you're on top of the next wave because you're still looking at the one that just past

Okay, so this is our 90's day! I have had so much fun doing the single theme days (80's, Disney, Supernatural) with Heather, at All Roads Lead to the Kitchen, that we had to do the next decade.
(I had massive issues with the rotation of the photos, they looked fine on my phone, but uploading to the blog...well yeah.) 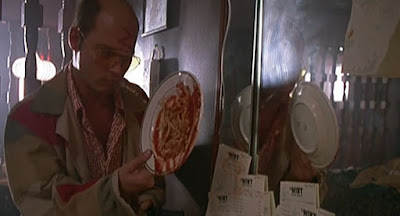 I took my inspiration from a scene at the end of the first half of the movie. The part where Duke wakes up after days of his drug coma, to find that he's been abandoned by his buddy Dr. Gonzo, and left with such a large hotel bill that just can't be paid. He picks up a plate of days old fries and decides it's time to hit the road.
I decided to do a vegetarian version of Poutine.  I was thinking of originally doing fries with a homemade sauce of some sort, to incorporate the fact the movie has a ton of limes and grapefruit, but I'm not that talented. So instead, I went with the "magic mushroom" idea, making Poutine with mushroom gravy. 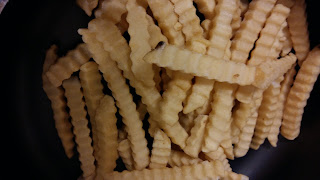 I did make this with cheats, frozen fries and gravy mix.  Just cook the fries to package instructions. 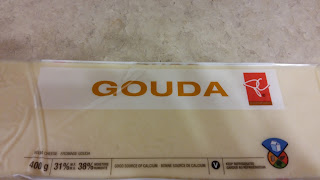 Normally, you would use a cheese curd, but I used a lactose free vegetarian friendly cheese. This melts slight bit better than the vegan soy cheeses they sell here, but still not as good as proper cheese does. 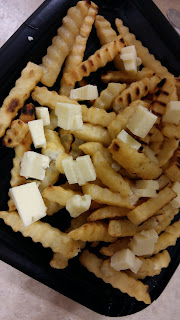 The gravy came out a bit more on the watery side than I was hoping for. 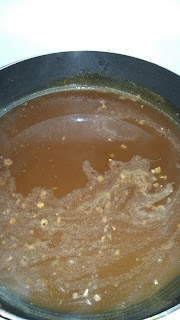 I'm a fan of quick meals, even better when they are one pot-style. As you can see, the cheese was just starting to melt when I took the photo, I couldn't wait. As I said, it was little on the runny side and even with the spiffy Hallowe'en bat place-mat, it was dripping everywhere. (we can't park here it's bat country) 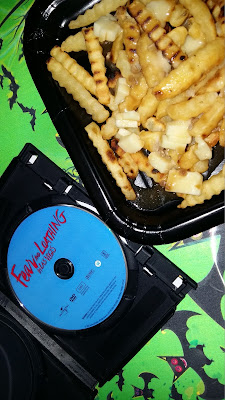 So, if you haven't headed up over to Heather's blog yet, it's time to do that. I love seeing what movie she picked and what is on the table. We've got a few more of these coming at you next month, heading quickly into Hallowe'en, so if you would like to jump in with us, you can leave a comment on either this post or Heather's. Next month's theme has not been pinned down just yet, but if you let us know you want in, we'll let you know the theme.

Posted by Domestic and Damned at 8:50 AM