What that movie inspired me to do

I think I mentioned once back in year one when I covered Edward Scissorhands, that it was one of the lest interesting Johnny Depp films for me. I know, a lot of people are gasping and fainting from hearing me say that, but it's true. But, this movie has been plaguing me for the last few months. (it's been on tv a lot the last month) Too the point, I couldn't get the family bbq scene out of my head. I wanted to do a version of the ambrosia salad that is shown, but try as I might, and I've tried a few failed times, I just can't seem to get the vegan marshmallows to work.  So instead, I dug deep into the recipe box and decided to make a Vegetable Alfredo dish. The recipe originally called for chicken, but I used tofu instead.

I used extra firm tofu, drained and just broken up into smaller chunks, frying it in a pan with salt.  Yes, salt.(tofu has zero taste on it's own if you've never used it)  Turn it every few minutes, like you would if you were pan frying chicken, adding a bit of water when needed. 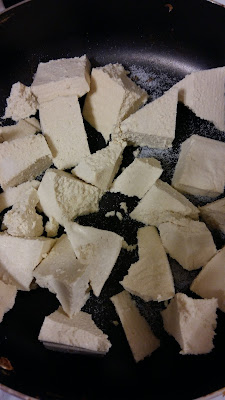 While that's cooking, you can made a simple Alfredo sauce with flour, butter, cheese, ground black pepper and milk.  I used almond milk and a bit of water.  The cheese was lactose free vegetarian gouda. 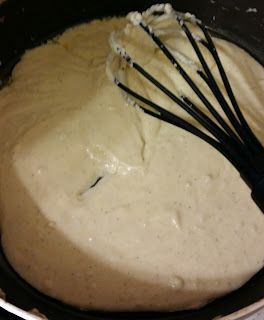 I went a head and chopped up half an onion, half a red pepper, 1 cup of cauliflower, 1/2 cup green beans, 1 cup broccoli.
Steam the cauliflower, beans and broccoli, then toss with the raw onion and red pepper. 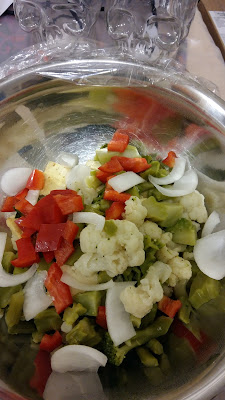 Cook desired amount of  fettuccine to package instructions, drain and toss with vegetables. Add the tofu tossing it as well, then pour the alfredo sauce into the mix. Make sure it coats everything.

This sort of reminded me of the hair-do, the character of Edward has, and the bits of red; the cuts he makes by accident all the time, as well as the green hinting at the gardening he does through out.  Not only is this a super easy recipe, you can add whatever vegetables you have on hand. 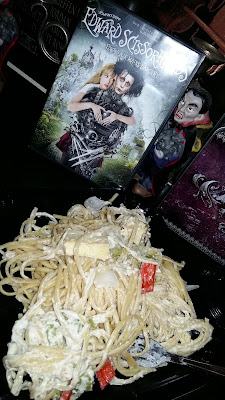 Of course I have a copy, it is a version of Frankenstein after all...

Posted by Domestic and Damned at 4:06 PM