So this is day 5 of the blog's Hallowe'en week, and it happens to be the monthly vampire book/movie club day.  And I have a confession to make...I did not finish reading the book. I know, I'm the host to book club, but I failed to do my own homework before hand, and did not realize the book is 700 pages long. When I added it to the list, I thought it was one of Stephen King's shorter novellas.  So I ran out of time, and never finished the book half of the combo this month.

I did however, get around to Fright Night, and decided to give you a "what that movie inspired me to do" dish to soften the blow of no book half... The combo was suppose to be that of the neighbourhood being taken over by a vampire and no one believing the one person who knew.

What I am going to do, since I never officially listed anything for next month's combo, I'm going to extend this month's into next, and offer the choice of doing the originally planned combo of the book Frankenstein, and the 1994 movie version Mary Shelley's Frankenstein.( starring Kenneth Branagh and Robert De Niro)  So if you want to join in next month's Night Bleeds, it's a choice of Fright Night/Salem's Lot  or Frankenstein.   And since I've only got myself to blame for not finishing my homework...I'll be covering both. 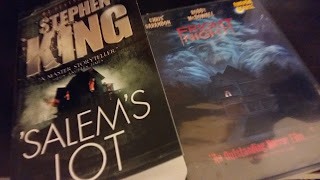 Fright Night (1985):  Charlie Brewster is obsessed with vampires. When he spots the new neighbours moving a coffin in next door, he becomes obsessed with proving there is a vampire living there. When he goes to the police, telling them about the murdered prostitutes last being seen at the neighbour's, no one believes him. Turning to his local hero, a late night horror host Peter Vincent, Charlie finds himself in a battle for not just his own soul, but that of those closest to him.

The key elements in this movie are belief, respect, loyalty, courage, desperation and obsession.  This is probably the best bridge between the way horror movies had been and the direction they turned in the late 80's going forward. The vampire movies started to turn from the point of view of the hunters to that of the vampires, not too mention, the vampires went from being the village terrors to becoming slick, sexy, desirable ideals. The scenes with the character of Peter Vincent, do play out more like the classic vampire movies, with him having to prove that the vampire is indeed a supernatural creature. As well, as fighting off the Renfield character of Evil Ed. The apartment Peter Vincent (classic combo name of Vincent Price and Peter Cushing) is decorated to remind you of the old Hammer style films, as there were always garlic and crosses prominent throughout the "old inns, churches, castles".  The big theme in those old style films, was always having to save the soul of the virginal girls, which in itself was a metaphor for losing your virginity and becoming "an adult". We see this played out in the character of Amy. When the movie opens, we see her ready to give herself to Charlie, who's distracted by his "childish obsession" with vampires as he sees the neighbours move in with a coffin. Amy, later in the infamously cool dance club scene, is in turn seduced by the older man, and turned into a vampire. The dance scene in itself is very erotic and more than suggestive to the idea that she has "lost her virginity" to him. When we next see her, she's dressed similar to the "brides" in most classic vampire movies, and it's once again Peter Vincent who raises a cross shying her away.
There's a great line midway in the film, where the vampire Jerry Dandrige tells Peter Vincent that in order for the cross to work on him, Vincent needs to have faith in it. Lending to the idea, that because of him being an actor, he's lost all faith in anything other than the material. This line is repeated later on near the end, when Vincent does in fact hold Jerry Dandrige back for a few moments with the cross. I have to point out, that both Evil Ed and Amy are easily affected by the simple sight of the cross, implying one of two things; either because they are fledglings and therefore weaker, the cross has a lot of power over them; or their own faith and belief in the image of the cross is what causes them to buckle. Suggesting highly that the power of suggestion is greater than the sword. (you can also argue on a third idea, that because Dandrige is such an old creature, the Christian god has no power over him as he predates Christianity/has other religious beliefs)
The opening scene, also shows us a thin line between obsession and desires or even that of basic needs. As Charlie is easily distracted by what's going on outside of his window, ignoring his girlfriend. Sex becomes less a need for him as he lets himself become engulfed with his obsessions. We also have a vampire movie playing in the background of the opening scene, with "Mr. Peter Vincent the Great Vampire Hunter" who is shown holding his stake backwards as he begins to kill a vamp. This again gives to the idea of not paying attention to your surroundings, and not paying attention to the situation at hand. It goes on to lend to the idea that your personal heroes are fallible. In the end of it all, the cowardly "movie hero" Peter Vincent, turns out to be the real hero of the plot, as he's the one who kills the vampires. He does this because he's left with no choice not because he's brave and strong. His desperation is foreshadowed when he takes the kid's money to help Charlie to begin with because he's beyond broke. And again this shows you how he's lost faith in anything that isn't of the material world.

I have a recipe...there is a bit more food than you would have first thought, mostly in the first half of the film. From casseroles, to burgers, chips, sloppy joes, fruit, beer, fries, pop, and a few drinks at the dance club.   Because we see the character of Jerry Dandrige eating apples more than a few times, I thought I'd make an Apple Brown Betty. 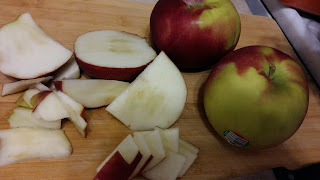 Slice up 3 to 6 large apples, placing them on the bottom of a pie dish, if you'd like you can add a light sprinkle of lemon juice to them to keep them from turning brown while you proceed, 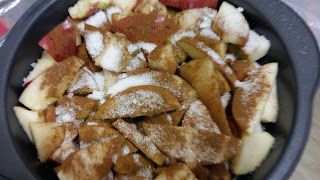 Sprinkle both  2 teaspoons white sugar and cinnamon on them. You may add a pinch of nutmeg if you wish. 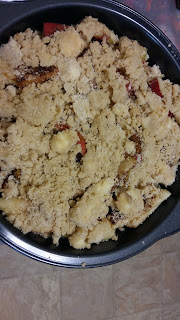 mix together 4 tablespoons butter, 2/3 cup of brown sugar and 8 tablespoons flour into a crumbled mixture, spreading over the top.
Bake roughly 45 minutes at 350degrees depending on your oven. 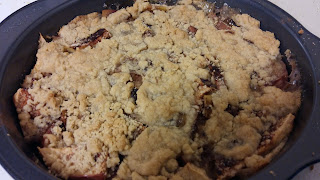 I know, so simple it hurts right? 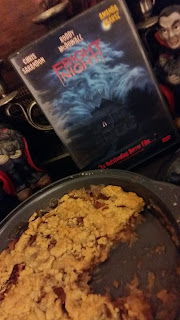 I know my essay sort of blows this time around too. I've got bit more I want to say on Fright Night, which I will try to cover when I do the second part of this next month. I just didn't realize the book Salem's Lot was as long as it is, and just didn't allow myself enough time to get through it.

As I said, I'll extend this month's book club/movie combo to the end of November, and let anyone who wants to join in have a choice between it and Frankenstein. More on that later in the week with the official post.

Don't forget to check out Heather's offerings over on All Roads Lead to the Kitchen, this month, (here) she actually did the homework.

Posted by Domestic and Damned at 2:14 PM