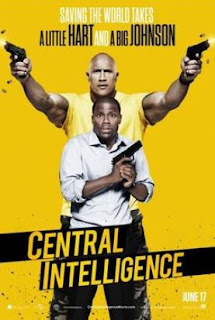 plot: The high school all star finds himself the night before his 20th year reunion, getting a surprise visit from the one kid everyone picked on. The two hang out over old times, but soon end up in the middle of a CIA investigation.

This has some really great laugh out loud moments, like Johnson's character lugging a plane through a hanger on his own, him breaking down the whole point of old 80's movies,(I'm ashamed to say half of which I've never seen so the jokes were lost on me)  or the one scene where he uses a tie to start a fire forcing them to jump out a 30 story window.

The comedy seems to be jammed into the first hour, and then it goes into a crime/action film. Which is fine, only it looses what makes it good, which is the buddy comedy aspect. The film becomes too serious, which makes it feel longer than it was.

There is a bar fight at the beginning, which sets the mood for the caper. Which of course plays out the game of who's really the bad guy and who can you really trust?
I kept waiting for it to reveal that the character was so deep undercover, which would have explained some of the unicorns and crap, but it seems they played those elements as meaning to be there.

The big themes here seem to be anti-bullying, and loving yourself no matter what others think or how they try to make you feel about you.

what did I learn? It takes a very confident man to embrace his inner unicorn.

Posted by Domestic and Damned at 6:32 PM