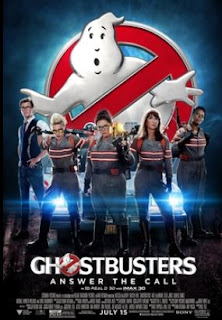 plot: After being fired from her job as a professor, Dr. Gilbert is forced to take a job with her former best friend, Dr Yates, in checking out the legitimacy of a hunted house. With the help of Dr. Holtzmann, and city worker Patty, they discover a plot by a mad scientist to open the portals between this reality and the one of the dead.

So I loved this movie. I went into it liking McCarthy and Hemsworth, and expecting a lot of cameos from the original cast.  I'll start there. McCarthy rocked the roof off. She makes arguing over soup the funniest thing on the planet. Hemsworth plays a confused character. Literally. I am still scratching my head why they made his character so dumb?

SPOILER ALERT : there is a small statue of Harold Ramis, Bill Murray plays the paranormal debunker, Annie Potts plays the angry hotel manager, Dan Aykroyd plays the lazy cab driver, Slimmer appears to steal Ecto, the Stay Puft Man appears as a parade balloon, Ernie Hudson plays Patty's uncle the undertaker, Sigourney Weaver plays Holtzmann's boss.  I was more than a little upset that Rick Moranis did not make any appearance, as he was always one of my favourite characters. Aykroyd had one of the best lines in the film as he says "It's only a class five" when referring to the city being over run by ghosts. The giant twinkie in times square is a little in joke that you might not catch at first. END SPOILERS

The first scene is in itself a bit of a tribute to the second movie, as you get to see a river of slime, which is what was causing the ghosts to react in Ghostbusters II.  I like how they gave a nod to the current trend in paranormal "hunting" with their little snip of "reality tv".
And I have to say it, the whole mixing heavy metal with the occult. Full on 80's style of horror, even though this isn't a horror, just the fact they go for the goat.  Yeah, you read me right...goat.  I loved that kind of  feel. The music they used for the metal concert was lacking in everything, but the "spirit" of it is there.

what did I learn? If an actor is willing to be slimmed, slime them every scene.

Posted by Domestic and Damned at 8:02 AM