It's that point in things again, where I say Food n Flix is being hosted by  Wendy at A Day in the Life on the Farm;  and the selection this month is  2015 sci-fi drama The Martian.  (based on the novel)

I realized I hadn't taken part in group since last November; so thought it was high time to jump back in. 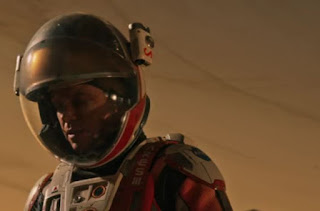 plot: When an astronaut is accidentally thought dead and left by his crew on Mars; he wakes up to find he's alone. After tending to his wounds, he figures out a way to send a message back to earth, and begins to turn the deserts of Mars into a workable farmland. Back on Earth, the government begin plans to rescue him, only they find out they are on an extreme deadline, as he's low on supplies after a brutal storm destroys his farm. Finding himself once again struggling for survival, he manages to travel halfway across the planet's surface to meet up with the rescue ship, which takes over a year to complete.

This film is all about survival. It flips back and forth between the isolation on Mars and the chaos on Earth. You never see any of the earth shots where there isn't at lest two people in them. Same goes for the crew after they have left mars. Another sneaky note, is that the earth shots always have food in horrendous amounts. There were a few scenes, where the artwork were even food related, not too mention the junk food that was in mass supply.  All to contrast with the bleakness on mars.

I think the fact they kept showing little things like the salt and pepper and ketchup etc, was an interesting touch. Just sort of driving home how we take things for granted that we never realize we do.

This was one of those movies where there were no bad guys. For once, the "big corporation" was just as much the good guy as the hero himself was. Even though, the emphasis was on how much "the bosses" had (side tables overflowing with chocolate and cookies) and it was very in your face, it was never done from a cruel way. But, an ironic and sort of sad way.
I also thought the use of the pirate metaphor was brilliant, having the lead character expressing certain things by revealing tidbits of sea-fairing laws.  He literally becomes a space pirate.

I had to really keep my focus on the food for this, because A) the movie was overflowing with it, and B) if I stopped to think about the whole alone isolation issue, I wouldn't have made it through the film. I admit, it had me crying at a couple of points.

In the movie, we see him grab the potatoes that one of his crew members had brought for Thanksgiving dinner. He pretty much survives by growing potatoes. I promised Heather at All Roads Lead to the Kitchen, that I would not make anything with potatoes; without even having seen it yet. I am actually glad she held me to that promise, as it forced me to really jump back into the game.

I decided to take my inspiration from a few other elements in the film.  We see him counting out the freeze-dried rations, as well as planting seedlings. We also see him packing up as much as possible to hike across the unknown desert, his supplies not much more than dehydrated and nearly rotten potatoes. 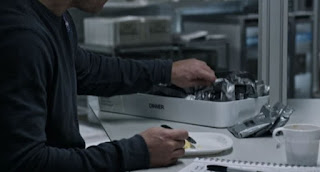 Dehydrated + sun-dried + seedlings + power hiking = granola.  Well, it does in my brain anyway. 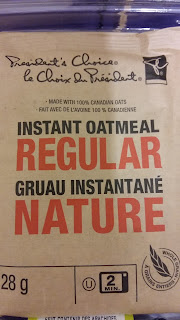 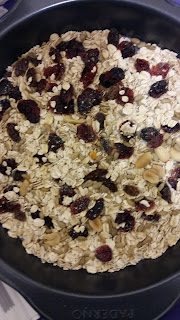 put in freezer until solid. 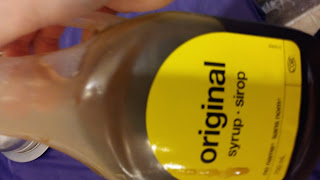 Okay, so this is where I admit, they fell apart. The recipe I had, literally said "in freezer until solid enough to hold shape".  I had them in there for over four hours, and they still fell apart in the middle of my taking the photos. I don't know if they just needed more time, or more syrup or if I didn't form them tight enough?  But, they did taste amazing.

I would suggest, these would make for a better topping on yogurt then trying to have as bars. 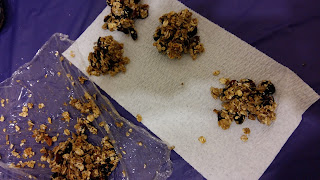 Well, that's about all that I've got to offer on the topic this month, don't forget to join us next month when  the group will be looking at  A Touch of Spice, hosted by Culinary Adventures with Camilla.

Posted by Domestic and Damned at 3:14 PM