What that movie Inspired me to do (Shaun of the Dead)

It's that time again, my lovely Spudguns! for another recipe inspired by a movie. And once again, I'm joining Heather from All Roads Lead to the Kitchen, for her zombie recipes.  But first the movie...

plot: When a zombie outbreak happens leaving half of London, members of the walking undead, two buddies Shaun and Ed, hatch a plan to save their loved ones - Shaun's mom and girlfriend- and hide out in the safest place they can think of; the bar down the street. Their only problem is getting there safely with a pack of mindless flesh eating zombies in the way.

This is the first movie of the Three Flavours Cornetto Trilogy (Hot Fuzz and World's End rounding it out) where each film featured a flavour of the brand's ice cream.

The big theme here is taking responsibility and letting go of the past. We see a scene early on, where the two are fighting off a zombie by throwing their record collection at it and just arguing over which records to use. Which is the lighter side of this. A more serious side of the theme comes about midway in the movie when we see Shaun's parents get bitten and he's got to make the choice of trying to save them (his mother hides her bite for awhile, afraid and nearly ashamed of it not wanting to upset him. Much like a patient who knows they are dying not wanting to tell their child) or help them to end their suffering.
This gets repeated later with the character of Ed; who throughout the film, is the metaphor (and sometimes literal) element everyone says is holding Shaun back from being a grown up.

There is a lot of foreshadowing, with Shaun constantly bumping into people in the first few minutes and saying "next time I see you, you're dead". Which of course is the running joke, as everyone then becomes zombies. This is also shown by how everyone around him for the first few minutes of the film are so bored, you would think their lack of energy had already turned them.

I loved the fact this movie is overly ambitious in pointing out how everyone seems to lack any real ambition. It's the curse of the slacker generation X (sadly my own generation) Everyone just seems to have settled into the idea that they either shouldn't bother trying for anything real, or that they don't really deserve anything more than the bit they do have.
I also love the nods to the zombie franchises such as Evil Dead (he's working in a "mart" just like the character of Ash) and the most unassuming anti-hero becomes the smartest guy in the room. I also dug the fact they sort of predicted the zombie craze by the last scene in the film. Having a "zombie tv culture".

And the BBC geek in me was laughing out loud with the appearance of most the cast members from Black Books and Sherlock showing up in the one scene, when they meet up with the second group of survivors.  Dylan Moran already being one of Shaun's crew as David. 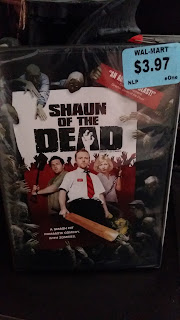 Okay, so I took my inspiration this time from few things. 1- the bar and 2- the line "you got a little red on you".  There is a running joke through the movie where Shaun near the beginning gets ink on his shirt and someone points it out, then as the movie progresses, he gets more and more blood on him. So, I decided to make "You've got some red on you" sauce and "zombie skins".

Separate the wrappers, sprinkle salt and rosemary on both sides, place into oven for 20 minutes at 350 degrees

Or, deep fry, in which case you would sprinkle salt and rosemary after they've been fried but still hot 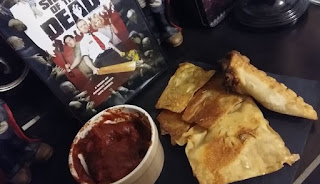 So simple it hurts right...well if you'd like to see me expand on this review by about 10minutes and watch me making a fool out of myself while I fight with the wonton wrappers, then you can click the two videos below.


Posted by Domestic and Damned at 9:39 AM