plot:After the world has been hit by a plague caused by germ warfare, one man holds the key to finding a solution for the remaining survivors.

Okay, right off, I'm pissed that they removed ALL the direct vampire stuff. They kept in the majority of the story; a plague that wiped out half of the world, the "family" only coming out at night and having light blindness and pale skin, the main character having to survive their attacks. The isolation the character of Neville feels in the novel is kept to a point, but isn't as strong in this movie version. In the novel, which spans a course of a few years, the isolation drives him completely insane.
In this version, the Neville character is a big shot scientist, which also differs from the novel.

They however, twisted the rest of the story.  He's not exactly the "last man on earth" in this version of it. There are other survivors like himself, but they are living in the mountains away from the cities and the "family" of mutants (vampires). He meets up with this woman and easily falls into a sexual relationship with her, and manages to save her younger brother from the plague by way of blood transfusions. The woman then out of nowhere; no literally she's fine one second walking down the street suddenly stops and poof she's a mutant, becomes infected. She then turns on him telling the "family" (vampires) where he's hiding. They capture him, big battle, sunrise comes and the bad guys run away.

This movie was considered controversial when it first came out. Took me a long coffee break to figure out why? Then it dawned on me as I was stirring my almond milk into my coffee cup watching the swirling colours mix.  One of the first movies to have an interracial couple. Got it.

The end scene has the lead character in a fountain, bleeding into the water, and he's stretched out for a moment in the form of a cross. One of the human survivors takes a bottle of Neville's blood which is the only known cure for the plague.  There is almost a hidden vampire vs vampire thing going on here. The "family" refuse to allow the idea that a simple blood transfusion could reverse all that they have mutated into; while Neville's simple act of transfusing his own blood into the plague victims, is "siring" new humans. An almost stronger race in itself.
The "family" for some reason fear technology. They are out to destroy all forms of "modern life", setting fire to art, typewriters, books, televisions etc. They react to Neville in much the same way, claiming he's one of the last "modern oppressors" and the last link to the life they had before the plague.

So the vampires are hinted at, but unlike the novel are never out right expressed. Which, had I known ahead of time, would have picked one of the other three adaptions of the novel. (yes there are 4 total at the time of this post) But this was my first time seeing this movie, after years of hearing how cool it was, how much of a classic it was I was under the influence of cool vampire stories. 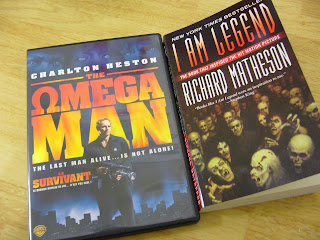 I Am Legend:Neville somehow managed to survive an unknown outbreak, leaving him the last human alive as far as he knows. The rest of the world's population, has been infected by a flu that eventually killed the infected host, but managed to turn them into vampires. He spends his days out collecting what he can, and hunting the vampires, while locking himself indoors at night. He's discovered over the course of about 3 and a half years, that bullets are useless he needs to drive a wooden stake into them, and garlic is his greatest weapon. After spending the first year grieving for the lost of his wife and daughter to the plague, he begins to want answers as to why and how it happened. To the best of his research, he learns the virus was caused by a super mosquito and a strange amount of "dust storms". After discovering sunlight causes the vampires to turn to ash, Neville realizes the dust storms were in fact the vampire ash polluting the air causing the spores to regenerate in a fresh host. Longing for companionship of any kind, he meets a woman one afternoon. Taking her in, he tests her for the infection, which she passes but he still does not trust her, and soon learns she's one of the vampires. Only now they have grown immune to sunlight and garlic. His days quickly become numbered now that they know where he lives.

I maybe wrong, but I do believe this was the first story to connect the vampire genre to science? A theme that would become common place in vampire fiction, (where something went wrong in the lab causing vampirism, or you know the bombs radiation) from movies like Red Blood American Girl, Reign of Darkness and books like Vampire Winter.

I was disappointed to find the actual story was only 160 pages. I had a nearly 400 page book, thinking it was the length of it, only to find page 161 started the "collection of shorts" which were NOT advertised on either the front or back covers.

The isolation the character feels is deafening. In the beginning, he rarely talks out loud, which after awhile in itself begins to lend to his madness. This leads to his increasing alcohol abuse which fuels his depression tenfold. He's tortured every night by the vampires in the area trying to hunt him, as they surround his house, tossing rocks and garbage at his windows, calling him out. All led by his former best friend Cortman. There is a strange dynamic between Neville and Cortman. Both constantly threaten to kill the other but never do, and when the "new breed" of vampires begin to slaughter the group of vamps camped outside Neville's home, Neville feels pity for Cortman, even fearing for his friend's life.

There is a distinction made between "living vampires" and "dead vampires". Which, to be honest, didn't make a whole hell of a lot of sense to me. They all went boom-poof when he staked them or dragged them out into sunlight, so I really am not sure where the author was going with that part? The emphasis seemed to be on, the older the vampire was (dead) the quicker they ashed, where as the newer (living) felt more pain before hand.

I also might be mistaken, but I do believe this is one of the first stories to add in the idea that not all vampires were affected by the cross. It's not anything new as far as folklore goes as every culture has had a form of vampiric creature since the dawn of time, but for hollywood fiction, it's one of the first to actually point out that not everyone believes in the Christian god. The character of Neville comments on the fact a few vampires laughed in his face when he tried to use the cross on them, but when he pulled out the Torah, those vampires fled in disgust and fear. Proving that the individual vampire had different strengths and weaknesses. And leaving up the question of what happens when an Atheist vampire is not affected by any religious icons?

There are comments about food through out the novel. Mostly talking about the fact everything is frozen, and how the character got what one must assume for the time it was written, an industrial restaurant sized freezer. In the novel, there are no animals left either, no way to get eggs or milk etc. As the story takes place over the course of 3 and a half years, which we first walk in on around year two.(the first year is then covered in flashbacks through out) Neville talks about having to thaw out everything in the morning in order to cook at dusk, and about how precious his generator actually is. If the vampires figure out he's got a power source and destroy it, then he's unable to survive. The book I loved until the last four pages, then the whole story just fell apart for me. Things seemed to get tossed into the story only to be undone. I found some of the main themes to be madness, depression, loneliness, race/status, and abuse. Whether the author intended it to come across like that or not, I'm not sure?  But I kept coming back to the scenes where he's discussing the fact every morning the packs of vampires on Neville's lawn, had fewer and fewer females because the males were turning on them. Where as Neville destroyed the vampires regardless of their gender, only the females were being killed at night by the males. Which again would come back to the idea of  survival of the stronger/faster. I do find it interesting that this was written when segregation was still a real issue. You can look at all the characters in that light and see it reflected in different layers of the story. From the sole surviving Neville being separated from the vampires in his neighbourhood, to the male vamps keeping themselves above the female vamps in the nightly hunts, to the new breed keeping themselves separated from the "common" vamps, and eventually from Neville. Each believing themselves one step better then the other they were hunting.

Alrighty, so the last two months of the book/movie club, I literally skirted in an hour before deadline with finishing them. This month, I got right to them and had them finished over a week and half ago. And I still don't have a "inspired by" part for the post. I promise before the year is over I'll have at lest a couple done.

That about wraps up this month's post. I'll be back tomorrow with a round up post, in case anyone else has done one.  And the selection for April will be  John Steakley's  Vampire$ (1990 book) and John Carpenter's Vampires (1998 movie) deadline for those will be Sunday April 24th. But, I'll be back later in the week with the official Night Bleeds announcement post.

Posted by Domestic and Damned at 7:43 AM