This month's selections were a themed combo. The Female Slayer.  We watched the original 1992 movie Buffy the Vampire Slayer, and read the 2010 monster mash-up  Jane Slayre.

Buffy the Vampire Slayer: In every generation there is one girl with the skill and strength to defend against the forces of darkness, she alone is the slayer. (I originally talked about this one back in year one. Day 84.  And had been inspired to do a food post last year - What that movie inspired me to do 24)  Buffy has no idea that she comes from a long line of women protectors. Or that any of the dreams she's been having are actually memories of past lives. That is until she meets Merrick, her watcher. The dreams are warning her that Lothos, a master vampire has once again resurfaced in her area. Lothos, has been building an army of vampires, mostly teenagers, ready for the fight. Buffy, on the other hand is still trying to juggle her new reality with her old one, being a normal teenaged girl.

So Buffy is listed as one of the first female heroes to really impact pop culture. True, but not true. As horror movies tend to have both the lead female as victim and heroine mixed into one. (Prom Night, Psycho, Halloween, A Nightmare on Elm Street) She is however, one of the first to have the main plot around the fact she's taking back her power.

We see Buffy literally be forced to grow up, in a short time. Literally hours as she goes from learning about her slayage to having to defend herself in a graveyard of fresh dug up vamps. That sort of shock to the system is what brings her out of her "highschool years" and into the "real world".  This forces her to take a long hard look at the people she considers friends (the popular girls who mock everyone even her behind her back, the teenaged boyfriend who cheats on her, breaking up with her answering machine because he's too much a coward to face her) and what she really wants out of life.
This in turn leads her to Pike. An older guy (undisclosed how much older but would assume collage age) who has had the tough luck of stumbling upon the vampires via his best friend Benny who was bitten.  I like the character of Benny. He's the link between worlds so to speak. The teenaged vampire who still has some of his old personality left. Makes you think that if the character had survived the film, he would have been given a sequel as a Master himself... no?

The theme here is simple, you never know what you are truly capable of doing till you're forced to do it. 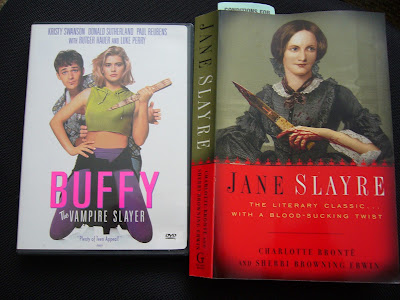 Jane Slayre: After living the first ten years of her life in a house of vampyres, Jane finds relief at the idea of going away to school. But not soon after, she discovers the school's big secret, that it is a breeding ground for zombies. Zombies that become servants to the ever growing vampyre population. When she's old enough to leave the boarding school, she finds a job and a home working for a wealthy man as a governess. But even that happiness is short lived, when Jane discovers a werewolf living in the house. Running away from all she loved, she finally learns there are others like her, the Slayres, born to rid the planet of what lurks in the shadows.

Like February's selection Abraham Lincoln Vampire Hunter, this is a mash-up story. Unlike ALVH, this is not history mashed with fiction, but fiction mashed with fiction. The base line is Jane Eyre by Charlotte Bronte. The story of a young girl who is mistreated by her family then shipped off to boarding school where she undergoes a mixture of humiliations and kindness. She then becomes a governess, falling in love with the man who hired her before learning he's already married.
The mash up part, which is written by Sherri Browning Erwin, is the Buffy connection. Little nods to Buffy come in the ever now popular vamps turn to dust, the "cramps" that inform both that vamps are near, the slayers coming from one bloodline, a "watcher" who trains Jane while at boarding school.

Themes seem to run from betrayal, illness - both physical and mental, love/lust, self acceptance, status/class, religion, family.  The character of Jane finds her strength through her torment as much as she does through love. She spends the first half of her life just trying to survive a rough environment.
There is a scene where she's bitten by her young cousin John Reed, that could be seen as a sexual assault. Using lycantropy as a metaphor for extreme violent behaviour, was a touch of genius. Not original mind you, but understandable.
The fact the zombies are bred in an extremely pious boarding school, made me chuckle. Having the girls obsessed with reading Psalms after becoming zombies, points out some of the direct connections between Christianity and Hoodoo. As Psalms is used in many talismans and offerings for spells/rituals. Using the whole zombie aspect as a metaphor for the conditions that would plague such schools back in the time the original Jane Eyre was written was also a clever idea.

Jane is left with a choice, she can follow her heart, which means living with an already married man being shunned by society, or break her own heart by leaving him. She does what she thinks is the right thing, by fulfilling her "slayer" side, and becoming a bit of a watcher/hunter herself. But over time, her bond to the man she loves, Mr. Rochester proves to be more than just a simple sexual attraction. They are soulmates, able to feel each others pain across country. (I could spend hours on the idea)

What it inspired...so I pulled from Buffy the Vampire Slayer for my inspired project. In the movie, we see near the beginning of the movie, the characters of both Buffy and of Benny, each eating popcorn. Buffy at her house with Jeffery, and Benny sitting in the cinema with Pike. 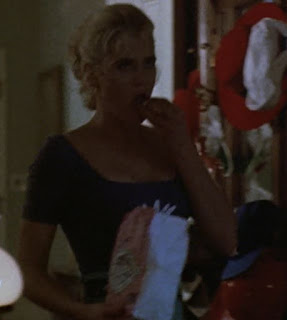 I can never get the idea of popcorn out of my head when I watch this movie, and trust me after 24 years of it being one of my ultimate favs, that's a lot of thinking of popcorn. Plus, you'll notice the dress she wears to the final dance makes her look like a giant kernel of the stuff. 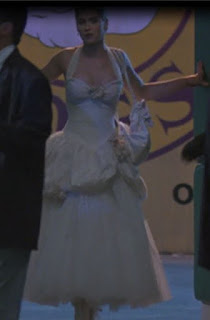 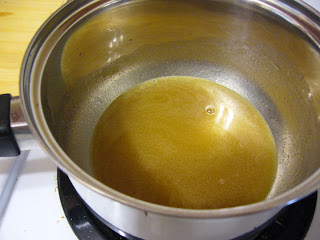 I made a caramel-toffy sauce covered popcorn 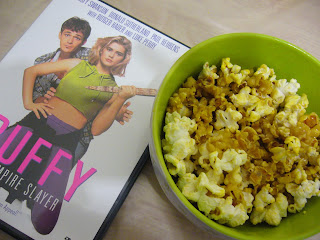 Next month we're talking about Interview with the Vampire. Both the movie and the book.
I'll be back later in the week with the official announcement post for it.

If you haven't checked out Heather's offering and thoughts on this month's selections, do so now - here.

Posted by Domestic and Damned at 7:52 AM