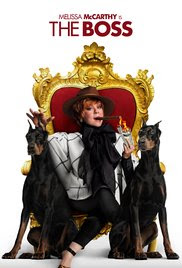 plot: When a self made millionaire is jailed for insider trading, her life hits rock bottom. Before long, she finds herself at the mercy of her former assistant as they partner up to rebuild their company.

You've got a buddy comedy that seems to be McCarthy's strong suite. We watch as the McCarthy character finds herself having to start over from scratch, dealing with not just the loss of her company, but realizing that she is utterly alone.
While her former personal assistant is willing to take her in, she's -the assistant- not willing to allow herself to have a life blaming it on the fact she needs to keep focus as a single mom.

The core of the story is family. The kind that we create for ourselves over the decades. We see both of the main characters standing up for what they want, but being afraid to have it all. Neither really admit that they are lacking some connections in their life, letting their work be their center point. And both are hiding from the men in their lives.

I did like this movie, but the story was watery at times. One of the biggest laughs came from the two women fighting over a bra.

what did I learn? When you invite someone into your sofa, be prepared to let them into your sock drawer.

Posted by Domestic and Damned at 4:57 PM