Vampires, books, movies based on those books.
That's what's on my mind this morning. Specifically, Night Watch by Sergei Lukyanenko.  I've mentioned the series of books/movies a couple of times in the last few years.  With the fifth installment of the book series (New Watch) hitting Canadian and American shelves this spring, (yes I realize it's been in print in other countries for a couple of years already)  I've dug my copies of 1-4 (Night Watch, Day Watch, Twilight Watch, Last Watch) out of my never ending to read pile; and am attempting to read them. 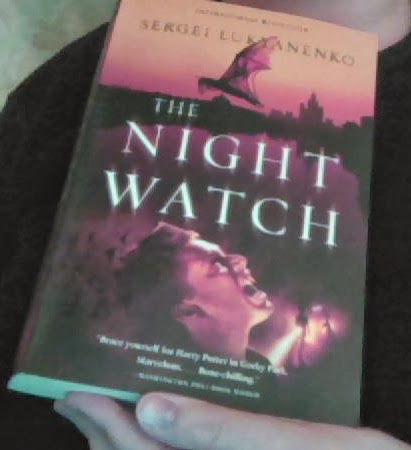 This is book one in the series. And it's not shy on length.  489 pages just in book one.

Why am I bringing this up this morning you my Spudguns! (haven't called anyone that in a long time) might be thinking?  I felt the strange desire to add something to the blog; with a picture, and I'm sort of stuck at the moment on the next installment of Nosferatu Adventures. (Dagan is just sitting there in my brain snarling. Got to love it when a character takes root in your subconscious)

I'm just starting this book, but consider this post an unofficial-official invitation to doing some sort of book club sort of thing.
In other words, yes have some. If you're up for the challenge of reading this series with me, or have already read them, then let's turn this post into a bit of a discussion on the books. Otherwise, I'll just randomly be back over the course of the next few months to talk about each book.

I know I've mentioned the movie versions of books one and two in my top 5 lists a few times,  and it would be nice to see how they differ from the books.

Well, I see everyone's coffee is getting cold, so till later...

Posted by Domestic and Damned at 9:53 AM