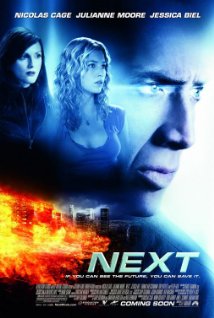 plot:When a stage magician is revealed as the real deal, he's hunted by the FBI and a group of terrorists. The FBI want him to help stop a bombing, while the terrorists decide to hold his girlfriend captive in order to keep him off their trail.

This is loosely based on the story the Golden Man by Phillip K. Dick

Like pretty much every action film, this had it's fair share of car chases, shoot'em ups, and the running away which would have been a car chase twenty years ago scenes.
I've heard a few people call it confusing with the way the scenes play out, never clearly letting you know in the beginning of the movie, what is happening and what is a psychic vision. I found it more annoying more so then confusing.

I did however, love the scene where he astral projects himself into multiple versions, which would take a massive about of skill and energy like shattering your conscious through a prism.  I would have loved to have seen less shoot'em up and more supernatural elements.

What do I think I learned from this film? Sometimes things are hiding in plain sight.
Posted by Domestic and Damned at 9:32 AM