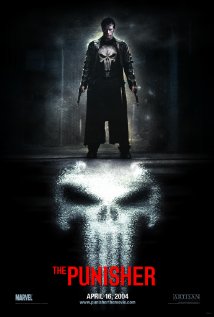 plot:After his son is killed in a drug bust, a wealthy mob boss takes revenge on the family of the undercover cop he feels is the one responsible. Thinking him dead, he forgets about him until the cop returns for revenge of his own.

Based on the comic/graphic novel series.

Through this movie I kept having deja vu. Then I found out this is a remake of the 1989 version.

Typical of the movies for that part of the decade, all shoot first talk never. Car chase, check, lots of bullets, check, token wrestler in non speaking role, check. Yep, all there.
In all fairness, I really dug this movie. It seems to be hinting at the fact it takes it's cues from westerns and not the big cop action films.
I also like the fact this is a dark movie and makes no apologies for it, putting it on par with the Batman films. It makes you ask yourself if your entire world was taken from you, how far would you go in order to get some peace of mind? Having him use his skill set as an undercover cop with the manipulation the lead character uses to get in the head of Travolta character, was a great departure from some of the typical shoot em films I've seen.

what did I learn from this movie?  There is a fine line between what is taught to be right and what we know to be right, and few are able to go there.

Posted by Domestic and Damned at 8:45 AM