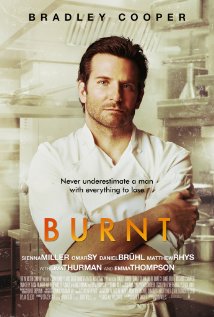 plot: After having lost everything because of his addictions, chef Adam Jones, makes it his mission to once again be on the top of the food chain. His plans include getting back together his former co-workers, and sweet talking one of his oldest friends into handing over the restaurant his friend's dad built. But before chef Jones can build his dream future, he needs to settle the score with his past.

Right off, I went to the cinema to see this back in early November, but waited to post.

Since seeing this film, I've mentioned to friends a few times that it was like watching an episode of Hell's Kitchen. There is literally a ten minute scene where all the lead character does is throw out food because it's not "perfect".  There is another scene later on, when the sous chef starts screaming that "it's raw!" before tossing a plate into the wall.  It comes as no surprise that Gorden Ramsey was one of the producers on this.

This is listed as a comedy, but I have said before that I don't really get the classification system sometimes, cause all though there are some giggles, this is a pretty serious film.
And food of all kinds makes an impression in it, from 3 star Michelin to over processed burgers at a fast food chain.
I have to say, the scene where the two main characters are sitting in a fast food place arguing over a  burger  (literally and figuratively) and whether or not the minimum wage is fitting to the work, is one of the most point on arguments in the food industry. The Cooper character stating all food has it's value and place, while the sous chef turning her nose up at it.
Then you have the whole metaphor of switching out one addiction for another, and how driven the lead character is to keep "clean".  His opening scene has him counting up 1 million shucked oysters, as a form of punishment for what we have yet to learn. And once he hits the millionth oyster, he writes it down in his little black book and simply walks into the sunset.

I was disappointed that Emma Thompson who plays the therapist only had a few moments on air.

Cooper played a chef on a short lived tv show few years back that was based on the biography of Anthony Bourdain, Kitchen Confidential

What do I think I learned from this movie: Nothing is impossible, even perfection.

Posted by Domestic and Damned at 6:47 AM