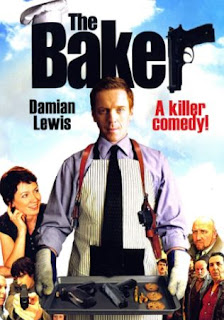 plot: After a hit is taken out on him, an assassin decides it's time to quit the business. He does so by hiding out in a small village as the new baker. But it's not long before his cover is blown, and the villagers begin expecting more then just bread when they order from him.

I really dug this film. It had everything from elements of a buddy comedy, to a crime film, to a romance and exploding sheep.

There is a sub-text involving the second hitman who is assigned the bounty for the Baker, that plays out in the last few scenes when they have their big confrontation. Hint- love triangle.
And I love that they named the wannabe Eggs. Cause you can't really bake without eggs most of the time.

What do I think I learned from this movie:Everyone deserves a second chance. Sometimes the most unlikely job is truly your life's calling. Sometimes a chocolate cake is just a misunderstanding.

Posted by Domestic and Damned at 7:08 AM