Okay, so normally this year, I've had cute little titles for the films, but today, I'm just straight up giving you the movie's name. (like the last post with Hell Baby) 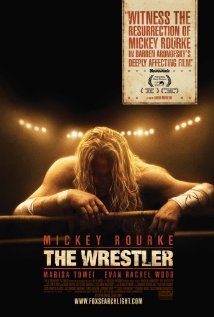 plot:  A semi-retired pro wrestler deals with the fact his health is failing. After a major heart attack, he takes a look at his life and realizes that he's got nothing to call his own, and tries to repair his relationship with his daughter. Meanwhile, a stripper he's become close to is having trouble dealing with her own choices. Both lean on each other but in the end, find themselves alone.

I don't think I ever covered this movie on this blog, but if I have well...it's worth another mention.

I've seen this movie like 10 times and I cry every time.  I think it's Rourke's best performance ever.

As you watch it, you're drawn in close to the isolation and self pity the lead character has. He's the kind of man who devoted his entire life to his greatest passion, but still managed to come up short. The sacrifices he made in the beginning, become his own personal limbo at the end.
As much as this movie is about how heroes can get lost in the shuffle, and taken for granted, it's about how each of us as humans can at times, stumble when it comes to making real connections.  Both leads are lost in their own worlds where the crowd's attention is what keeps them going.  One chooses to save herself, the other chooses to give in to the crowd.

I loved that real wrestling companies ROH, CZW, WXW were used. The backbone of the industry, where so many of the guys are.  And who doesn't love seeing Necro Butcher and Blue Meanie...

What do I think I learned from this film? It really is lonely at the top. Everyone no matter what they do in life, has to face the same fears in order to see the same joys.

Posted by Domestic and Damned at 11:15 PM