Spudguns! it's been a few months since I last joined in the group, and I couldn't think of a spiffier way to cap off Hallowe'en Week this year then doing a little treat based on a movie of tricks.  The Food'n'Flix selection this month is Beetlejuice, and it's being hosted by Deb at Kahakai Kitchen.

plot:  When a couple are killed in an accident, the find themselves stuck in their old house as ghosts with a new family. After many attempts to rid themselves and what they consider to still be their home, of the unconventional modern family, they hire a so called expert to help. The self proclaimed bio-exorcist offers them not only a free possession with every expulsion, but his help comes at a price. He wants to be able to keep his human form, and not be confined to the afterlife. Soon, the ghostly couple find that they have more than just the uber modern family to get rid of.

I do believe I've chatted about this movie back in year one of the blog. (I know I did, I'm just too lazy to search for the post) 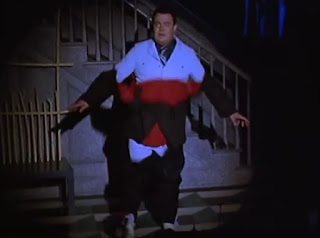 I would love to say I had this great out of the box idea for this, but that would be a lie. It sort of stumped me, (I think that I've hit a food creative wall lately)   One of my favourite scenes actually has nothing to do with the main cast, but with the sidekick Otho during the ending of the seance; where he's stripped of his dark cool looking suit and ends up in the powder blue nightmare 70's one. And I desperately was trying to come up with something for it. Sadly, my creative food writers block got bigger. 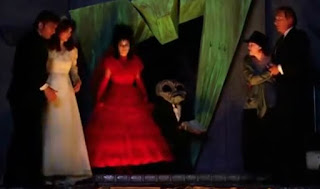 But, as I was staring at the screen giving myself an ego attack, I thought about the blood red wedding dress Lydia gets "stuffed" into against her will. And I had it! So simple it hurts, but I made a really easy Stuffed Red Pepper. I started with a basic mushroom fried rice. 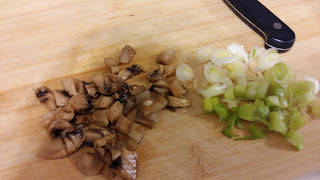 Cooked the rice, added some chopped mushrooms, green onion, and a fried egg.
Mixed it together with a splash of oil and pinch of crushed red pepper flakes and a splash of hot sauce. 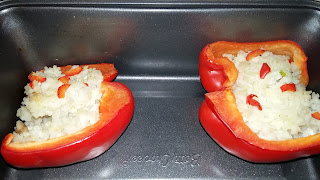 I then gutted the pepper, stuffing it with the mixture and baking it for 20 minutes at 300degrees. 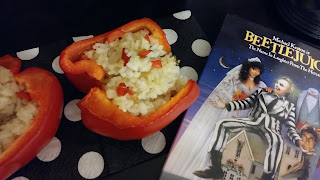 Sadly, I don't have a spiffy cute name for it (my creativity is suffering)  Don't forget to join in next month when the movie de jour will be Burnt, which is being hosted by Caroline at Caroline Makes.

Posted by Domestic and Damned at 8:24 AM