Spudguns!, it's that time of the time when I hand you an offering for Foodn'Flix. The selection for this month is being hosted by Simply Inspired Meals; and their selection is anything from the Star Wars Franchise. Anything.  This should be a breeze right. The movies have been apart of pretty much everyone's lives for the last 40 plus years and we all have some memory of them.  I was actually really jazzed when I heard about this. But, sadly for me, as the time ticked away, I became less and less so.  I thought "hey, they're on tv all the time."  and  "the stores always have copies."    Well, it seemed my timing was off. I couldn't find a copy of them to save my life.   That is other than Star Wars 11 :Solo A Star Wars Story ( some would argue that it's actually #12 but I don't consider the animated film part of the movie line up).  Luckily, Netflix Canada still had it available.

Now, I've seen Solo before, and really liked it. Watching it for group was a bit difficult as there isn't a lot of food related scenes, and what there is, half the stuff I couldn't identify. That is partly because the story takes place on another planet and about half the food is "designed" to be otherworldly.

plot:  Han and his girlfriend are fleeing their con-artist/thief boss, but are detained at the border and end up separated. While his girlfriend is arrested, Han ends up joining the military in order to escape capture. After a few years, he defies orders and ends up arrested. While in a form of prison, he meets Chewbacca. The two make a break for it, and end up working with a group of rebel for heir thieves. They have been hired to steal a shipment of an unrefined lethal explosive. When they fail the first time, they barely manage to talk their way out of being killed before given a second chance. Han then is reunited with his ex-girlfriend, who is now both their boss and the wife of the mobster who hired them. We then meet Lando Calrissian, who has also been hired to pilot them. Han is left wondering who's who in his world and where his trust should be placed.

Han Solo, was always one of my favourite characters in the Star Wars films. I'm a bit of a snob when it comes to the movies. I am a fan of the original three and wasn't very impressed at all with how the rest of the movies have unfolded.

I know there was no point in me trying to create some big decorated piece, my skill level just doesn't curve that way. So, I went with what I know best.  Soup.  Which, given the fact we have a scene where our little group of thieves are camped out making their plans, while they make soup, it's actually fitting. 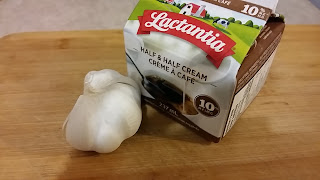 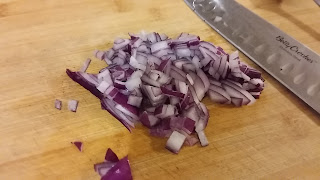 I started by making my veggie stock, and in this case, just used a bouillon cube and water. 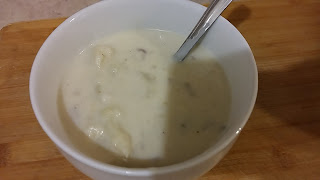 Next, I added the garlic and cauliflower.  I let this simmer for about a half hour.  Then I added my onion, salt, pepper, and butter.  Let that simmer for another 15 minutes, before taking it off the heat.

I let it cool for about five minutes before adding my cream and flour. Whisking the flour and cream into the soup for a few moments before returning it to the heat. I continued to whisk as it gently began to boil, before once again turning it off.

So, you might be wondering why I went with a cream soup, when I mentioned that the one character uses beets when he's cooking them dinner. It actually has more to do with the original movie and the fact there is just so much white in it. The film has so much monochromatic moments with costumes, that I can't help but think of milk/cream or cream soups.

Okay, I think I'm going to end this here. Next month, Foodn'Flix will be hosted by Eliot's Eats, and the selection will be O Brother Where Art Thou?

Posted by Domestic and Damned at 9:13 PM 3 comments:

Spudguns!, this is normally the point where book club is due.  The summer (July/August) selection was/is  The Stand by Stephen King.  Which, is over 1000 plus pages long. And sadly, even with two full months, I still haven't finished it.  So, I will have to suck it up and say, I'll come back in a week or so and get the review for it done then. This will not change the date on September's selection. I'll still be back the first few days of September with an official announcement on it so stay tuned.

I've got a few recipes/dishes lined up for later in the week too.   And yes, there are the blog serials still to come.

With Hallowe'en coming up, I've been working on a few video projects connected to that which has been eating up all my time.

That's about all I have to talk about right now. I'll see you later in the week.

Posted by Domestic and Damned at 6:51 PM No comments:

Spudguns!,  it's just after 9am EST where I am, and I should have posted this last week.  I saw the movie Holmes and Watson last weekend, but the week really got in the way of me sitting down and doing this post. In a way, I'm sort of glad it did.

plot: Holmes and Watson are hired to solve a string of murders after Queen Victoria's life has been threatened.  Watson, who's not yet a detective, has a lot to prove if he's ever going to get the promotion he's looking for. Meanwhile, the emotionally frozen Holmes has fallen in love for the first time. This clouds his judgment as he lets Watson be sent to jail.

Okay. So, I love anything related to Sherlock Holmes, but this was just crap.  John C. Reilly normally spins pure gold, but this movie left me scratching my head as to why he decided to be in it?  Hugh Laurie plays the part of  Mycroft Holmes but even that couldn't save this movie. (Stephen Fry who is Laurie's comedy partner played the character in the Robert Downey Jr movies)

I need to rant about Will Ferrell for a moment.  His last few movies Zoolander 2, The House, Daddy's Home 2, Holmes and Watson;  have just been terrible. I have to say, if he's writing his own stuff then he should get someone else to write for him for a few films. If he has someone writing for him then he should take back control and write his own stuff. Either way, he's just been down hill the last couple of years. I really think he needs to step out of that buddy comedy comfort zone for a bit and do a serious drama or horror or something.

There's just nothing nice to say about this movie.

Posted by Domestic and Damned at 9:38 AM No comments: