Okay, it's that time of things again, and Heather was sweet enough to Heather was sick of me whining like one of her kids and to shut me up, let me have a second hosting this year over on Food n'Flix, and I picked Hotel Transylvania 2. (here announcement)  You might remember, last year I did my Brunch with a Vampire, and gave you omelettes and garlic croissants inspired by the first movie in the series. (yes series, very interested to see what is in plan for 2018's HT3) 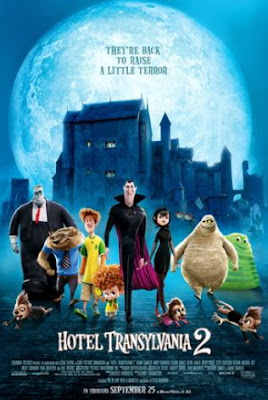 I talked about this movie back in September of 2015 when it first came out, but here's a reminder of it:
Plot: Mavis and Johnny have just had their first son, Dennis who is yet to show any signs of being a vampire. Afraid her son is completely human, Mavis begins making plans to move to the human world to live with Johnny's family. While visiting her in-laws to see if it's a good idea, her father Dracula is back in Transylvania babysitting little Dennis. Drac is sure that Dennis is indeed a vampire, just a bit of a late fanger. With the help of his long time buddies Frank, Murray, Blobby, Wayne and Griffin, they go to their old haunts. Only things don't go as smooth as they hoped. There is one option left to help Dennis become a vampire, and that's letting Dracula's dad Vlad in on the secret.

So my mind was everywhere, from making a "Blobby" to "Werewolf Bone" (spare ribs or rack of lamb) to "Kibbles and Bits" to "Deep fried Batwings and Acid Sauce" (spicy bbq wings with roasted garlic dip) to another stake through the heart cake. (one of these days I will redeem myself on that old post) but being vegetarian, most of those were no gos.
I knew I wanted to make it a bit more character based then scene based, but really had a hard time nailing down one character. In the end, I made a dessert that is both character based and scene based.

A few of my favourite scenes, happen to be the convenience store where Mavis and Johnny are talking to the night worker while she's hyped on junk food. The scene where Dracula is wandering around his bedroom complaining while Frank is trying on his clothes; which I call the Dudeman scene, and when the group are in the park trying to teach young Dennis to be scary, and it's Wayne's turn to kill a deer, and mentions poptarts. 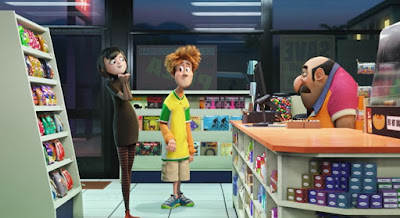 What I came up with was something that I can 100% say is the most out of the box thing I've ever let slip through my zombie eaten brain. It's also the laziest recipe I've ever allowed myself to do. I mean lazzzzzzyyyyyyy!  I should be ashamed, but I'm actually proud of the idea. (it took me longer to do the post than it did the recipe) You can barely call it a recipe... 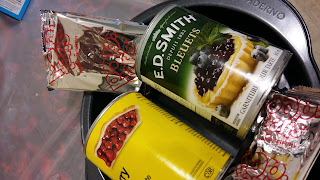 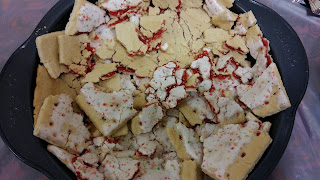 Crush the poptarts, spread over pie plate, leaving one for the top
open pie filling, spreading one layer at a time,
crumble leftover poptart on top
Bake at 275 degrees for 15 minutes, let cool enough to place into fridge for 2 hours to set.

That's it. Embarrassing as it is to say how lazy this is, it was so worth it.  It is the most junk food you can cram into a single slice of anything, and not feel like you've just inhaled a ton of junk food. Even though you know you just basically ate a plate of sugar. 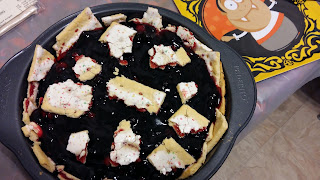 I wanted to do something that represented the convenience food, the idea of blood and of course the poptarts.  And of course there was no real thinking involved, so nod to the zombie food blogger Porridge Head in the film. 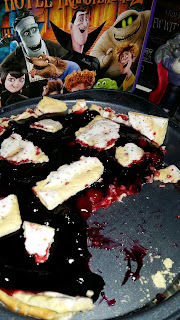 Deadline is next week, and I'll be back with the Round Up for it the day after that. So don't forget to come back and find out what everyone came up with.  And next month, the group will be covering the movie Frida hosted by Eliot's Eats.

Posted by Domestic and Damned at 9:00 AM