Spudguns!, it's that time again. This month's Foodn'Flix selection was 2019 movie Always Be My Maybe, and is being hosted by Culinary Adventures with Camilla.

plot: A celebrity chef returns to her hometown to launch a new restaurant and reconnects with her childhood best friend/first love.

I didn't really care for this film. I've said before, I'm not a big fan of romantic comedies, and this really felt too formulaic for me. The highlight for me were the scenes with Keanu Reeves playing a hyped up version of himself.

Okay, so the amount of food in this movie is really high. I was not even ten minutes into this movie when I already had a half page of written notes.

I just gave up trying to take notes on the walk-in freezer and farmer's market.

I had a difficult time with this one. But the scene with the breakfast burrito sort of stuck in my mind. I've done one before though for the blog few years ago (one of my zombie recipes) so sort of didn't want to go that route again. Then I was thinking about the potstickers and I ended up going with a super simple snack. A deep fried wrapped banana. 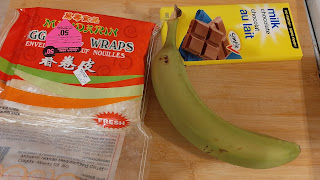 I just cut the banana in half, then cut each half on the diagonal, and rolled them each with two squares of the chocolate.  Then deep fried them for about five minutes, rotating the rolls constantly. 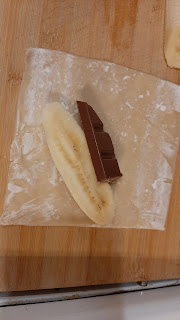 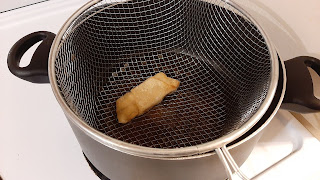 I drained them on a paper towel, letting them cool for another five minutes, and ate them while still warm. 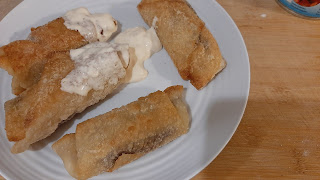 I decided to use a heavy cream at the end instead of a dipping sauce, as the chocolate made the rolls a bit sweet already.

That's all I have for you this time around,  don't forget to check out Foodn'Flix  next month, as our selection will be Nina's Heavenly Delights, and it's being hosted by Heather at All Roads Lead to the Kitchen.

Posted by Domestic and Damned at 8:44 AM 8 comments:

"I'm pissed off." our heroine snarled as she continued to walk in a tight circle in the little room. Her hands on her hips, her eyes cast down as she felt her double row of fangs threatening to break through her gums. The banshee cast a half glance down the hallway at the direction the voice was coming from. Astrid had found the little trio sitting in the middle of a Robin's and told them she knew who they were. Nosferatu now snorted as she heard the sound of the woman's muffled voice as she whispered to someone.

"Come on, take a chill already. So this chick knew we portalled. So, she's a witch." the male hybrid continued as he tapped his fingers on his knee.

"She's no witch." the pale female spat as she pointed towards the hallway. "She's a Librarian." she continued to move around the room like a caged animal.

"And?" Edric shrugged as he nodded towards Seward who'd been in the back area of the room, pressing his palms tight to the walls looking for what he was sure was a hidden door.

"As in magick mirror dumbass." our heroine growled. It was all she could do not to rip through the walls. Ever since they'd landed back in this decade, something had been nudging at our heroine's nerves. For a reality that wasn't suppose to have much, if any magick, she was sure she could feel it tightening around her. Something she just couldn't put her finger on.

"Uh magick mirror? Do you think I could get a message to Landin then?" Seward asked as he continued to knock on the wall near the window looking for a soft spot.

"I don't know?" our heroine said her fingers now at her shoulders and neck. "Your cousin seems to think he's so upper class." she hissed in frustration.

"You say that like it's a bad thing." Edric snorted, sighing loudly. The male hybrid crossed his ankle over his knee before uncrossing them and propelling himself out of the chair he'd been sitting in. Since they had entered Astrid's home, Edric's senses had been on fire with some unknown scent.The banshee-werewolf hybrid was down the hallway in a half a breath his overly sensitive nose leading him to the source of the irritant. It wasn't until he found himself standing in the basement did he realize that the smells were coming from hair products. Astrid was a hairdresser. It was the chemicals from her perming solutions and dyes that were causing him issues. Sitting down in the salon chair, the male let out another sigh as he twirled the chair around before staring at his reflection in the work mirror. Bringing his right hand up to his chin, Edric raised an eyebrow thinking it was time for a new look.

The male looked down from the building's roof towards the street below him. Fresh painted had just been added to the asphalt in course yellow lines. One long run-on line that looked more like morse code than directions. Waving his hand he watched as the yellow stretches directly below him disappeared then reappeared in the form of an x. He giggled to no one as he jumped. The dark trenchcoat he'd stolen from the store in London blew out behind him like a cape, as he landed on his feet.  Mercury stuffed his hands into the pockets of his dark jeans and continued on down the street at a human's pace. The god whistled as he stopped at the nearest store window seeing a display of hats. He'd always favoured the page-boy style, and grabbed one in tweed. No sooner had he plopped it on, when a voice screamed at him that he couldn't do that.  Smirking, the sandy blonde male continued on his path.

"Sorry officer. Can't stay and chat. I'm late for a very important date."  Mercury tossed the words over his shoulder in a crisp British accent at the police officer as he staggered from his car. The cop followed him around the corner of a building but lost him as the god had already shimmered into thin air.

He stood outside under a lamp post waiting. The god knew he wouldn't have long to wait, knew all he needed to do was pop into the room. He simply wanted to wait to the last possible second, to have his timing on the dot in order to express the most dramatic affect. Shimmering now would kill the mood. Mercury toyed with the idea of just letting the female make her own choice without all the information. Toyed with the briefest of hesitations before shrugging off the idea. He walked silently from the end of the street towards the house with the lilacs in the garden. Walked smoothly across the wet grass that had been watered too much to the point it was squishy and not at all soaked in. Walked up the two stairs to the porch, opened the front door and just let himself in.  Edric was standing in front of him before the front door even closed, his nails sharp, his fangs exposed.  "No need for that." Mercury said snapping his fingers, sending the male hybrid across the room. "Sit. Good boy."

"Who the hell are you?" Astrid asked grabbing a hockey stick that had been sitting discarded near the kitchen door.

"I need to borrow Nosferatu." he nodded smiling. "I've got a message or two for her."  he ran the palm of his hand across the length of the hallway, exposing a small wave of blue light. "Here's my card." he replied too casually as a small white business style card appeared out of thin air.

"Mercury." our heroine's voice broke the tension from a few feet behind Astrid. "Why are you here?"

"Hello lovely. Been a few years. Well, centuries actually. I do believe it was just outside of Wallachia in the 1400's when I saw you last. How is Vlad?" he tilted his head to the side the brim of the hat casting shadows across his face.

"Again why are you here?" she crossed her arms under her chest giving her boobs a lift.

"In this reality or Thunder Bay?" he continued to smile, his roundish face warm as his grey-blue eyes shone. "Short answer, it's Thunder Bay and you're here in this reality."  Mercury cast a glance around the little house. "We need to talk and we should do so before you let Edmund through the portal. Unless you want to repeat what happens in forty years with the Van Helsing house."

Tune in again for another installment of the Nosferatu Adventures starring your heroine...me (straight up story. I know this last season has lasted way too long; almost two years so just time to turn the page on the season)

Posted by Domestic and Damned at 1:11 PM No comments: