It's that time again, where I tell you "hey, the group watched a movie and were inspired to make stuff". This month's Food n'Flix selection was Dirty Dancing, and it's being hosted by Chef Sarah Elizabeth.

plot: Two teenaged girls spend two weeks with their parents at a hotel, and end up falling for two staff members. The older sister unknowingly gets involved with the local cad, while the younger sibling ends up with the misunderstood rebel. Before long, they find themselves having to battle their own personal morals vs what they have been told they should believe in.

I am not going to lie, I've never been a fan of this film. I'm not a fan of  Romeo/Juliet style stories at all, and that's what this is at the core.  I have just never seen the appeal of this movie, or Patrick Swayze? (I always thought he looked like an oversized troll but...)   (I mean seriously, what was wrong with Watermelon Boy? She by passed the one guy completely for the flashiness of the dancer)

What this movie is about and does handle well is the topic of abortion, and I will give it all the props on the planet for that, and it was one of - if not the first major film to do so; but otherwise; when you strip that off you're left with a story about two teenaged girls who get involved with older guys.   Here, you have "Baby", this 17 year old kid who pushes her way into the lives of these twenty-somethings, sticking her nose in their business where it doesn't belong, pretty much steals Penny's job out from under her not too mention her best friend, and flaunts her wealth by giving her money to "fix the problem".

So, with all that said, I had a wait for it...TV EDIT ON VHS!  Yeah, I managed to borrow a really old copy and was so worried it was going to get eaten by my vcr.

There was a lot of breakfast foods that I saw, but I wanted to go with something...pink! Yeah, the nodes of pink throughout from the title to her dress had me thinking of icing sugar actually. But, the temperature here has been too much for me to handle without having the oven on; so I went for the only other pink food I know how to make...Beet and Potato Salad. 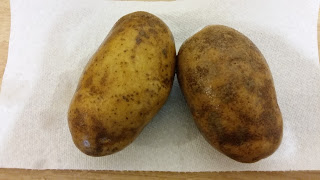 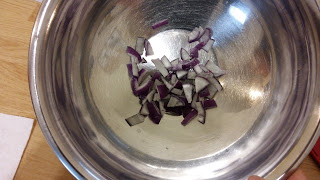 Boil potatoes in salt water till they are slightly tender, drain and chop
Set aside to cool, 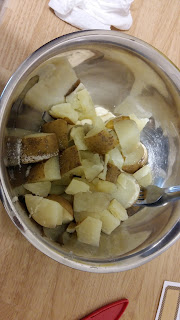 Put into fridge for 15 minutes, 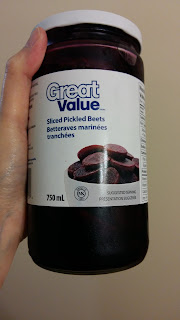 Take your beets and chop them up, I would advise doing so either on a plate or a paper towel, because they will stain everything.  I used 4 pre-sliced pieces but adjust to the amount of salad you're making. 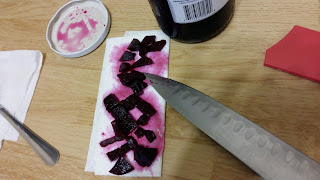 Remove potato salad from fridge and add your beets, mixing well,
Carefully add 2 Tablespoons of the beet juice.  Again, if you are making a larger salad you can add more, or if you want a darker colour.

Return bowl to fridge for about 45 minutes. 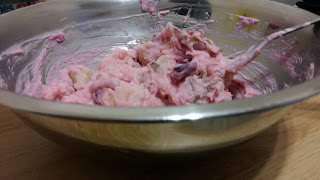 And that's all I've got for you this time around.    And next month's selection will be Second Hand Lions, and is being hosted by Fictional Fare.

Posted by Domestic and Damned at 3:42 PM