This month's selection for Food n Flix is the 2015 movie  Burnt, and its being hosted by Caroline Makes

I've talked about this movie before on here (last year this time) but here's a brief reminder  : Bradley Cooper plays Adam Jones, a once famous chef who'd managed to gain two Michelin Stars before his addictions forced him out of the business. Now, sober he begins to form his plans to not only get back to his career, but to earn that third star. He manages to charm old friends, new coworkers and everyone in between with his stubbornness and his recipes, but old habits tend to die hard.

Okay, so my two favourite scenes in this were the one where he's in the Burger King defending the fast food industry, and when the sous chef is making her daughter fish for breakfast over and over until she gets it right. I wanted to make a seafood dish, but I just couldn't convince anyone to let me cook it for them, and me being vegetarian, well there went that idea. (halibut with a white sauce and a side salad of red peppers, onions and blood orange was one idea, another was a breaded fish sandwich with mozzarella stick-fries)

What I ended up going with was a vegetarian dish that was a lot less fancy, but very comforting. Scalloped Potatoes. Yes, I finally got around to making a casserole for FnF. I thought this blended the ideas of my two favourite scenes just enough. The idea of comfort food (the burger scene) with this could be fancy (the fish scene) 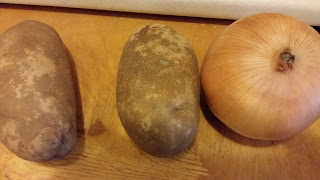 three large potatoes, half an onion, half a liter of milk, 1 cup flour, 3 Tablespoons butter, salt and pepper 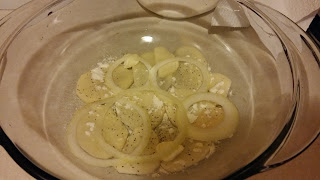 peel and slice the potatoes into rounds, as well as the onion

Layering everything - potatoes, onions, bit of the butter, flour, salt and pepper- do this about 4 times (roughly depending on how deep your dish)  until you are nearly at the top of the dish,

Pour milk over the layers, till it almost reaches the top 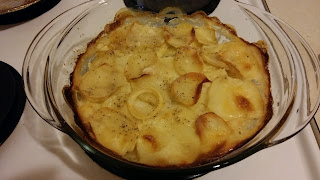 bake at 350 degrees for 45 minutes -depending on your oven


Okay, so I have to admit, since I was making this for someone else, I had salt in it, if I had been cooking this just for myself at home, I would have left out the salt completely and doubled up the black pepper. 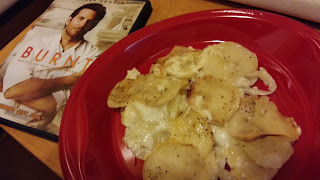 One of the reasons I always liked scalloped potatoes, was because it looked like it took all day to make, when it was a simple quick dish. So for me, it's always been elevated comfort food.


Next month, our fearless leader Heather from All Roads Lead To The Kitchen, is hosting and her pick is Krampus.

Posted by Domestic and Damned at 9:46 AM